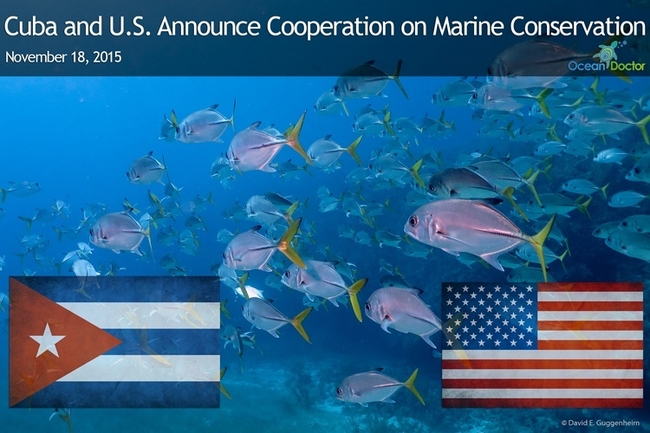 The National Oceanic and Atmospheric Administration (NOAA) and the National Park Service (NPS) signed a Memorandum of Understanding (MOU) with Cuba’s Ministry of Science, Technology and Environment (CITMA) yesterday. The agreement will facilitate collaboration in marine science, stewardship and management of Marine Protected Areas (MPAs). The MOU also aims to promote education and outreach initiatives in both countries.

The MOU builds upon the work led by a number of U.S. nongovernmental organisations (NGOs), including Ocean Doctor, Centre for International Policy and Environmental Defense Fund, which have worked for more than 15 years to elevate collaboration in marine science and conservation in Cuba during a period with no diplomatic relations and limited government-to-government dialogue. Marine conservation is recognised as one of the most successful areas of collaboration between Cuba and the U.S. during the years without formal diplomatic relations.

I co-led a decade of research expeditions with the University of Havana’s Center for Marine Research to create the first ecosystem maps of Cuba’s northwestern coast, until then its most unexplored waters. Banco San Antonio, the key Cuban component of today’s agreement, was part of those expeditions. In the process, this research helped train the next generation of Cuban marine scientists who today are in positions of leadership in Cuba.

Ocean Doctor works in Cuba, housed by its Cuba Conservancy Program. It has advanced beyond basic scientific research to comprehensive conservation efforts, including:

Coral Reef Health and Resilience: Ocean Doctor is leading research efforts focused on the health and resilience of Cuba’s coral reefs along Cuba’s southwestern coast, including the Isle of Youth. This research will help ensure the ongoing protection of these reefs and may help provide insights to protecting coral reefs throughout the Caribbean.

The Cuba-U.S. Sustainability Partnership (CUSP): In collaboration with the Centre for International Policy, CUSP was announced earlier this year. It aims to help Cuba prepare for the immense wave of tourism and foreign investment from the U.S., and also to prevent it from following the path of other regions in the Caribbean that have lost their culture and natural ecosystems, such as Cancún.

Valuing Cuba’s Ecosystems: In collaboration with World Resources Institute, University of Colorado Boulder, the Cuban Center for Coastal Ecosystem Research and other partners, Ocean Doctor is working to apply the tools of environmental economics to Cuba’s natural ecosystems to support sound decision making. This effort is focused on a proposal to expand the protection of one of Cuba’s most important marine protected areas.

Cuba Environmental Film Festival: In partnership with the Antonio Nuñez Jimenez Foundation for Humanity and Nature and the Global Foundation for Democracy and Development (Dominican Republic), Ocean Doctor is leading efforts to launch Cuba’s first environmental film festival in October 2016. The festival will feature renowned filmmakers and environmentalists from around the world as well as Cuba, and through film presentations and round tables, will serve to foster dialogue in Cuban communities about environmental issues.