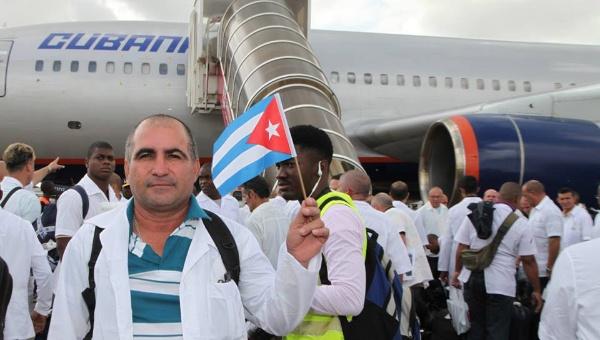 Cuba is known for sending medical personnel overseas as part of its medical brigade program which was launched during the 1959 Revolution.

The Bolivian Health Ministry thanked Friday Cuban doctors and the Cuban government for the solidarity offered to their country as part of Cuba's medical internationalism over the past 10 years.

Ariana Campero, the head of agency of the decade-long program, congratulated the local partners and conveyed greetings from President Evo Morales. “Thank you very much to Fidel Castro, Commander Raul Castro and the Cuban people. We are sending you all an embrace of solidarity from Bolivia.”

According to Dr. Pavel Noa, the national coordinator of the mission, the most important results that protrude from the mission encompass more than 63 million consultations offered to the Bolivian people, 179,282 surgical interventions performed and a total of 86,983 lives saved.

Medical workers are often believed to be Cuba's most important export, having served in countries all over the world and in particular in Latin America, Africa and, more recently in Oceania.

Dr. Alina Ochoa, head of Medical Assistance Brigade, stressed the importance of cooperation in the healthcare sector and said the aim was to ensure the health of the Bolivian people. "Cuba has a long and successful history in providing medical staff worldwide, which was ratified in Bolivia with the presence of more than 700 collaborators."

The representative of the Pan American Health Organisation, Luis Fernando Leanes, acknowledged the work of the Cuban mission, which he described as wonderful and very important. “How nice to be in this country and see Cubans and Bolivians working together for peace and welfare”, he said.

Cuba´s efforts in providing medical services to the poor have been acknowledged internationally as it was among the first countries to respond when the World Health Organisation called for medical staff to help with the Ebola crisis. Fidel Castro proudly described the 12,000 medical volunteers who signed up as "an army of white coats".