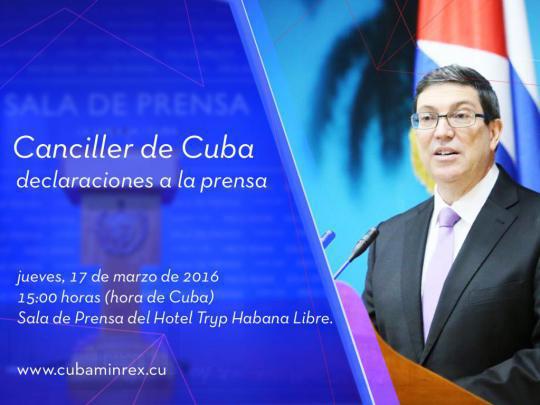 On March 15, the Departments of the Treasury and of Commerce issued new regulations that modify the implementation of some aspects of the US blockade against Cuba.

This is the fourth announcement of this sort made by the Government of the United States since December 17, 2014, when the presidents of both countries made public their decision to re-establish diplomatic relations.

We are currently analysing their scope and practical effects in order to confirm their feasibility.

After a preliminary consideration of these measures, it can be affirmed that they are positive.

Some of them expand the scope of those which had been adopted before; so is the case for the one authorising now individual “people-to-people” educational travels. However, it should be recalled that the legal prohibition that prevents US citizens from freely travelling to Cuba is still in force. This prohibition should be lifted by the US Congress.

Cuba’s authorization to use US dollars in its international transactions, a measure which has been included in this new package, concerns an important aspect of the blockade. For this measure to be viable, the US Government is required to issue a political statement as well as clear and precise instructions that would provide legal and political guarantees to banks, in order to halt financial persecution and reverse the intimidating effects generated by the sanctions imposed for years on US and third-countries financial institutions for conducting legitimate transactions with Cuba.

In the coming days we will attempt to make some transfers in US dollars to confirm that these can be done and that the banks have received instructions indicating that they are allowed to engage in financial operations with Cuba without fear of sanctions. Besides, we hope that, from now on, such fines as those given to important banks, namely Commerzbank and Credit Agricole, just to mention the most recent examples, will not be applied again; and that foreign financial institutions would not refuse to make transactions with our country.

Authorising Cuba to use US dollars does not mean that banking relations between Cuba and the United States have normalized. Cuban banks are still not allowed to open correspondent accounts in US banks, and therefore our operations will necessarily continue to be done through third parties, which increases operational costs as well as the amount of related procedures.

None of the other measures entered into force modify the implementation of fundamental aspects of the blockade. For example:

• Investments other than those approved in our country’s telecom sector are not allowed.

• The US ban on Cuban imports is still in force, and these include pharmaceuticals and biotech products. Thus, the limited authorised bilateral trade continues to be essentially a one-way trade. Only the absurd prohibition preventing US citizens from consuming and receiving Cuban products and services in third countries was modified.

• Current restrictions on US exports to Cuba, which are limited and exclude key sectors of the Cuban economy, have not been modified.

• Ships carrying goods to Cuba are still not allowed to touch US ports for a period of 180 days, thus increasing freight charges. The only measure adopted in this area was not meant to benefit Cuba, but rather to make US shipping companies operations profitable.

• Cuban as well as other countries’ individuals and companies are still arbitrarily listed as “specially designated nationals”, and for that reason they are prevented from doing transactions with US entities or their subsidiaries.

All of these restrictions could be eliminated by means of executive decisions.

The truth is that the blockade is still in force. Jack Lew, the Secretary of the Treasury, has himself recognised, two days ago, that the blockade still restricts, in a very, very significant way, the volume of transactions between Cuba and the United States.

The blockade also has dissuasive as well as punitive components. Here there are some examples:

• US and foreign companies have been fined recently for providing services and equipment of US origin to Cuba.

• Foreign companies trading with Cuban nickel and rum have seen their lines of credit cancelled and their bank transfers rejected, even if they were denominated in currencies other than the US dollar.

• Foreign banks have closed down the bank accounts in currencies other than the US dollar maintained by the Cuban medical staff offering their cooperation in African countries.

• US subsidiaries based in third countries have refused to provide their services to Cuban diplomatic missions and entities abroad.

The blockade is the most important obstacle to Cuba’s economic development and causes hardships to the Cuban people.

Therefore, lifting the blockade will be essential for normalising relations between our two countries.

Senior officials of the US have stated that the purpose of the approved measures is “to empower” the Cuban people. If the US Government is really interested in helping the Cuban people, then the blockade should be lifted.

We recognise the position adopted by President Obama against the blockade and his repeated appeals to Congress urging it to lift it.

We expect the US Congress to act accordingly in the face of an almost unanimous claim of the international community and ever broader sectors of the US society and public opinion.

Cuba has engaged in the construction of a new relation with the United States, in the full exercise of its sovereignty and committed to its ideals of social justice and solidarity.

No one should expect that, in order to achieve that, Cuba will renounce anyone of its principles or its foreign policy, which is committed to the just causes all over the world and the defense of peoples’ self-determination.

Within a few days we will be welcoming the US President with our distinctive hospitality as well as with the respect and consideration he deserves in his condition as Head of State.

It will be an opportunity for him to know about our reality and meet a noble, proud and patriotic people struggling for a better future against all odds.

The US President will be able to see a nation that is involved in its economic and social development and the improvement of the wellbeing of its citizens, who enjoy rights and are able to show some achievements that are still a chimera for many countries of the world, despite our condition as a blockaded and underdeveloped country.

It will also be an important occasion to identify what new steps could be taken in the next few months to contribute to the process of improvement of relations, on the basis of respect and equality, for the benefit of both countries and peoples.