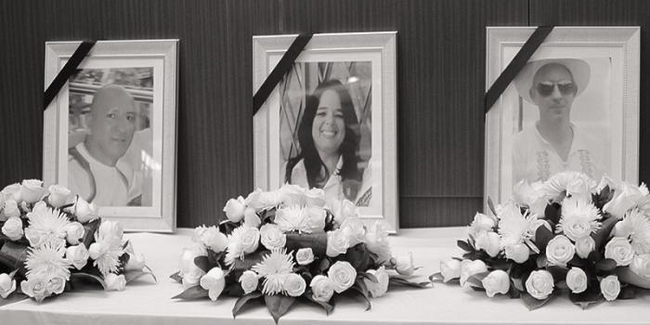 Quito.- On April 19, Cubans, Ecuadorians and members of the diplomatic corps paid tribute to the three doctors from the island who died in the earthquake which devastated the northwest coast of Ecuador on Saturday, April 16.

They shall forever be remembered as members from the glorious army of white coats created by our Comandante en Jefe Fidel Castro, stated María Isabel Martínez, head of the medical brigade which has been offering services in the South American country for over two years.

During the solemn act held at the Cuban Embassy in Quito, Martínez highlighted that doctors Bárbara Caridad Cruz, 46 years old; Leonardo Ortiz (53) and Eric Omar Pérez (41), all General Family Medicine Specialists, who died on Saturday, April 16, in the town of Pedernales, left their families behind in Cuba to come and serve the Ecuadorian people.

On behalf of her compatriots, Law maker María Augusta Calle, also coordinator of the Ecuadorian Movement in Solidarity with Cuba, conveyed heartfelt condolences to the families of the victims, and people and government of the Caribbean island.

We are deeply pained to return to you three combatants who died in our country, stated Calle who, clearly moved, also read out a letter signed by the President of the National Assembly, Gabriela Rivadeneira, in which the Ecuadorian Parliament expressed its regret at the tragic loss of the three Cuban health professionals.

The President of the Association of Cubans Residing in Ecuador, Rafael Nodarse, expressed the sorrow felt by members of this organization following the death of their compatriots who, in an act of altruism, came to offer their services to the Ecuadorian people.

Juan Hernández, minister-councilor of the Cuban diplomatic mission in the country, thanked the Ecuadorian authorities for their efforts in helping to recover the bodies of the three collaborators, and stated that the remaining 700 members of the medical brigade, together with the contingent of health professionals and search and rescue team which recently arrived in the country from Cuba, will continue to work with the same dedication as their late colleagues.

Participating in the tribute ceremony was a broad representation of Cuban health collaborators permanently stationed in the Andean nation; relations of the late painter Oswaldo Guayasamín; members of Ecuadorian solidarity with Cuban organizations; Venezuelan and Bolivian Ambassadors, Carol Delgado and Juan Enrique Jurado respectively, as well as representatives from Ecuador’s Ministry of Public Health.

The bodies of the three collaborators will be repatriated to Cuba in the coming hours, accompanied by doctors Oneida Toirac and Jorge Luis Quintana, who worked in Pedernales alongside the three victims and survived the earthquake which to date has left a total of 525 dead, over 4,000 injured and 231 disappeared.