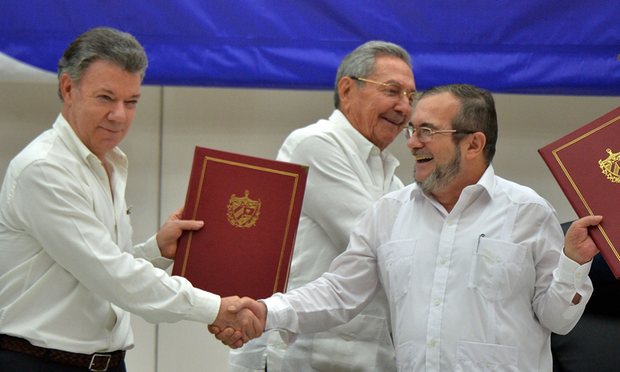 The Colombian government and Farc guerrillas have declared the final day of one of the world’s oldest wars with the signing of a ceasefire agreement to end more than 50 years of bloodshed.

“May this be the last day of the war,” said Farc chief Timoleón “Timochenko” Jiménez, his voice choked with tears.

“We are close to a final peace accord,” he said, after shaking hands with Colombian president Juan Manuel Santos at the signing ceremony in Havana, which was attended by the UN secretary general, Ban Ki-moon.

Although a final peace dealalso will require approval in a referendum, the formal cessation of hostilities between the two main combatants and the Farc’s acceptance of disarmament are key steps towards resolving a low-intensity war that has caused more than 250,000 deaths and the displacement of more than 6 million people.

Santos hailed a historic day for his country and its people – many of whom have only known war. “Colombia got used to living in conflict. We don’t have even the slightest memories of what it means to live in peace,” he said. “Today a new chapter opens, one that brings back peace and gives our children the possibility of not reliving history.”

The president acknowledged there were still conflicts with other smaller groups and gangs linked to drug trafficking but he said the biggest obstacle to peace has now been overcome.

Relating how his mother had presented him with a rifle when he entered the navy, Santos described himself as an implacable foe of the Farc, but he said the battle would now be fought with political debate not armed combat.

“Now that we have agreed peace, as head of state and as a Colombian, I will argue, with equal determination their right to express and to continue their political struggle by legal means, even if we never agree. That is the essence of democracy to which we welcome them.”

Several Latin American leaders were present to mark the end of the last major conflict on the continent. Among them were the Cuban president, Raúl Castro, who hosted the peace talks, and Venezuela’s head of state, Nicolás Maduro, whose country has observer status and played an important role in encouraging Farc to the negotiating table. Diplomats from the US also attended, following declarations of support from secretary of state John Kerry, who met both negotiating teams earlier this year.

UN Secretary General Ban welcomed the deal in the context of a “world set by seemingly intractable war”.

Castro declared the peace a “victory for the people of Colombia”.

A final peace deal is expected within months – perhaps on Colombia’s independence day, 20 July – following the compromise on Wednesday of the most contentious issue on the agenda: how to demobilize 7,000 Farc soldiers, who have bases in the mountains and forests.

The agreement has been a long time coming. President Santos had hoped for an agreement two years ago. Last year, the two sides set a deadline of 23 March 2016, which was missed because the two sides remained divided on the key issues of how and where the rebels will demobilize and disarm.

Although an informal ceasefire has been in place for months, the Farc were reluctant to lay down their weapons because they feared a repeat of anti-leftist violence, which led to the murder of some 3,000 members of the Unión Patriótica political movement, which had been created during a previous failed peace attempt in the late 1980s and 1990s.

Public hostility remains high toward the Farc and other leftwing rebels that financed their organizations through kidnappings and drug trafficking. But the government has reassured them of safety and support when they re-enter mainstream society. Farc’s leaders have now reportedly issued an executive order to “silence all rifles”.

Colombia has negotiated peace deals with three other rebel groups: the Quintin Lamé, the M-19 and the Ejercito Popular de Liberación (EPL). None challenged the state so much or for so long as the Farc, by far the most powerful guerrilla group in Colombia and possibly in the continent.

“This is the first negotiation that has dealt with the root of the problem that has led these guerrilla groups to emerge in the first place,” said Gonzalo Sánchez, director of Colombia’s Centre for Historical Memory.

“Other negotiations aimed to resolve the problem of weapons and not the social problems of the people,” he said.

The first point tackled by negotiators in the peace talks was the sharp inequality and lack of development in Colombia’s rural areas, one of the banners of the Farc when it first began to take shape as a group of peasant leaders demanding social justice in the mid 1960s.

International support for the process has been key to giving both sides in the negotiations assurances. UN participation in the monitoring of the ceasefire and demobilization is essential for the process, Sanchez said. And while financial assistance from European countries will be limited, Obama has asked Congress to provide $450m in US aid, which would include funds for removing landmines and security for former Farc members after they lay down their guns.

“Those who will be giving the most for peace are the same ones who gave the most for war,” said Sánchez, referring to billions of dollars in US aid to the Colombian government to build up its fire power and intelligence capabilities against the Farc as part of a package known as Plan Colombia.

He noted that Thursday’s announcement is still not the final stage of the process. “Despite the excitement, you have to add a dose of realism to the moment.”

The message on Thursday is that the conflict is over. But while the National Liberation Army, a smaller and weaker guerrilla group that has been around nearly as long as the Farc, has announced separate peace talks with the government, they have yet to get under way. The government has demanded that the group renounce kidnapping – its main source of financing – before formal negotiations can begin, which the ELN has rejected as a precondition.

“The ELN is missing out on the moment and it is going to be a problem for society and a problem for the Farc and for the ELN itself,” Sánchez said.

Paradoxically, Sánchez warned that the end of the conflict with the Farc could bring more social upheaval in the country.

“After spending half a century accustomed to the sound of bullets, now we will have to get used to the sound of social mobilization in the streets,” he said, noting that social movements have largely been repressed by the nature of the armed conflict.