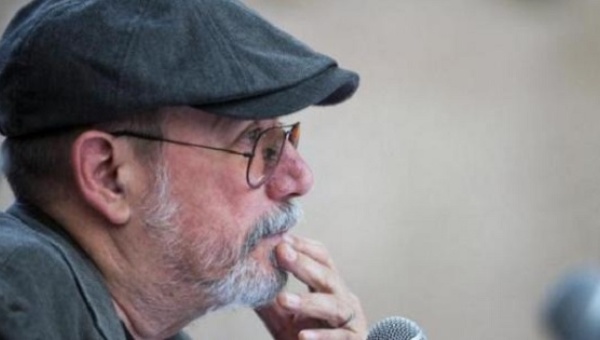 Cuban folk singer and songwriter Silvio Rodriguez said Sunday that the U.S. blockade on Cuba has been extremely harmful to the Cuban people, and that he could not conceive how lawmakers could pass such a bill.

“Those who vote in favour (of the blockade) are voting in order to harm my people ... This is something I cannot imagine,” said the prolific musician, who formed part of Cuba’s socially conscious Nueva Trova movement in the 1960s, in a long interview with Panamanian online edition La Prensa

Because of the blockade, Cuba "was excluded from the global system in many ways,” he said.

Touching on his collaboration with Sony Music for his new album "Amorios," he said, “With Sony, we have a contract of distribution, because as far as the production, (my albums) have always been recorded in my very modest studio Ojala ... We are viewing this deal with optimism."

About his latest album, he said he included “all the musical and creative elements,”with a special affection “for these songs that had never been edited and have now been produced with talented musicians.”

“I write because I like telling stories. Sometimes I have the idea of a song for many years, other times I discover the song after finishing it.”

“Music is a material that can be assembled or disassembled in many different ways, it has an infinite plasticity, this is what is so interesting about it,” said Rodriguez.

Asked about the fact that his music transcends generations and types of audiences, he responded that he tried to “avoid being sectarian and schematic... Although sometimes I write about specific things, I try not to fall into certain common places.”

He said he was currently working on several albums at the same time, “but with time we have become more and more demanding”—the reason why his album came seven years after his last one, "Secunda Cita" (2009).

“I don't like uploaded concerts of excerpts taken with a cellphone. This completely kills the sound quality of a musical work, quality for which musicians sometimes work for months.”

Rodriguez was one of the guests of the Cuban government at the opening of the Cuban embassy in Washington, D.C. in July 2015, the day of the formal reestablishment of diplomatic relations.