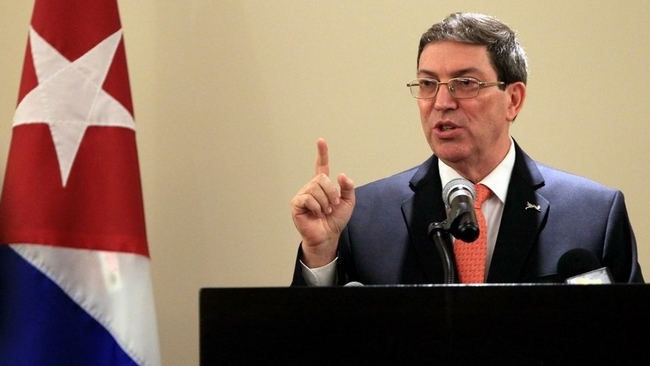 Bruno Rodríguez Parilla, Minister of Foreign Relations, presented the report calling for an end to the U.S. blockade of Cuba which will be debated in the UN next month

Minister of Foreign Relations Bruno Rodríguez Parilla, presented the country's report on United Nations General Assembly Resolution 70/5, entitled, "The Necessity of Ending the Economic, Commercial, and Financial Blockade Imposed by the United States on Cuba," in a Havana press conference on September 9 2016.

During the reading of the report, which will be discussed for the 25th time by the General Assembly in October, the minister reaffirmed that the blockade continues despite statements made by the U.S. President almost two years ago calling for its end. This policy has been maintained and continues having a profound impact on the Cuban economy, and limiting the right to development of the Cuban people, the minister insisted.

"The blockade hurts the Cuban people. Need and hardship are daily occurrences for the Cuban family. The impact of the blockade on Cuba cannot be underestimated. It is the principal obstacle to national development," Rodríguez said.

"We recognise the progress in relations between the governments of Cuba and the United States, but effects include those on food, the pharmaceutical industry, foreign trade, and international cooperation, among others," he reported, adding that no sector is exempt from the blockade's impact, not health, social security, services, or education.

Between April of 2015 and March of 2016, the blockade's damage to Cuba has been estimated to be approximately $4.68 billion dollars, Rodríguez reported.

"For these reasons, the Cuban government will present to the UN General Assembly, the report entitled The Necessity of Ending the Economic, Commercial, and Financial Blockade Imposed by the United States on Cuba," he said.