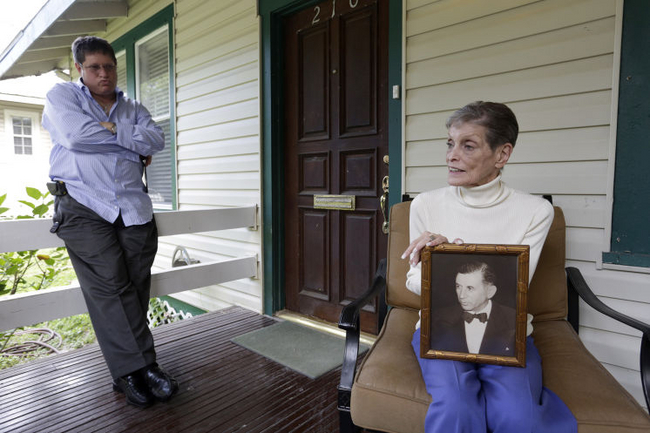 Sandra Lansky, right, holds a photo of her father, gangster and casino owner Meyer Lansky, during a visit with her son Gary Rapoport, left, at her Seminole Heights home. [JAMES BORCHUCK | Times]

Supporters of improved relations with Cuba say President-elect Donald Trump will have a hard time reversing the two years of momentum created by his predecessor.

But they acknowledge that Trump, who has signaled that he wants a better deal from Cuba, has at least one potent legal card at his disposal that could stifle relations. And the ripples could extend from the Tampa Bay area.

In his first two weeks in office, under a clause in the travel and trade embargo that Congress imposed on communist Cuba, Trump can permit Americans to file lawsuits against any interest that has profited from property of theirs nationalized by the Cuban government.

The question is, will Trump do it?

Jason Poblete, a Virginia-based attorney specializing in U.S.-Cuba policy who represents about two dozen clients who could file such lawsuits, is confident Trump is more likely to do so than his White House predecessors, if not immediately then later in his term.

"I think his administration will do what is best for U.S. interests," Poblete said. "The Cubans will need to step up and take positive steps."

The clause, called Title III, involves civil litigation filed in U.S. courts against either private companies — American or international — or the Cuban government.

Civil penalties imposed by the court could add to the debt Cuba already owes the United States, scare American and international companies away from doing business there, and punish those already doing so.

"Trump ran his campaign saying tyranny would not be tolerated," said Burke Francisco Hedges, a St. Petersburg heir to more than 20 nationalized properties valued at $50 million. "Let's send a message right away."

Title III is not in force now. It carries a provision allowing its suspension each six months, and every U.S. president has opted to do so since the clause was written in 1996. That means no one has had the opportunity to file suit. The current suspension, signed by Obama, ends Feb. 1, just 11 days after Trump's inauguration.

Bolstering the belief that Trump will not suspend Title III was his selection of Mauricio Claver-Carone, director of the hard-line U.S.-Cuba Democracy PAC in Washington, D.C., to his transition team for the Department of the Treasury.

Claver-Carone has testified before Congress that Title III grievances should be allowed to proceed. Earlier this year, he told the Tampa Bay Times in an email, "I support it 100 percent."

If lawsuits are allowed, the Southwest Airlines Tampa-to-Havana flights that launch Dec. 12 could be grounded, said John Kavulich, president of the U.S.-Cuba Trade Council in New York

The reason: The family of José Ramón López, who lives in Miami, claims Havana's José Martí International Airport is built on land taken from them, Kavulich said.

An heir could sue Southwest and any airline in the world profiting from the family's property and carriers would have to decide whether the penalties are worth the profit.

Then there is London-based Imperial Tobacco, which holds exclusive rights to distribute coveted Cuban cigars outside the island nation.

One of the brands is H. Upmann Cigars, rolled in a Havana factory seized from the Cuesta family of Tampa. The property's value was estimated at $400,000 when it was nationalized.

The Cuesta family could not be reached for comment, but they and any other American interest that owned a cigar factory seized by Cuba would have standing to file suit against Imperal.

Counting American citizens who had their property seized and Cuban citizens who left for the United States, "Title III would produce several hundred thousand lawsuits against Cuba for untold billions of dollars" said Robert Muse, a Washington, D.C. attorney who advises corporations considering business in Cuba. "This will effectively end for decades any attempt to restore trade between the U.S. and Cuba."

Among other local people who could file lawsuits are Tampa's Gary Rapoport, grandson of American gangster Meyer Lansky, whose Habana Riviera hotel and casino in Havana was nationalized. The property's value was estimated at $8 million.

The family of Clearwater's Beth Guterman had an estimated $1 million in property taken, including a school and a plantation.

They each told the Times they'd consider suing the Cuban government, which now manages the properties, and any company that invests in them.

Still, Antonio Martinez II, a New York attorney whose practice includes U.S.-Cuba regulations, notes that past presidents have opted not to invoke Title III because of the conflict it would cause with nations that have invested heavily in Cuba, including Canada, Great Britain, Russia, Brazil and China.

Plus, these lawsuits would "jam up courts," Martinez said.

"It would then take longer to collect, if anything is ever collected," he said. "Allow diplomacy to work."

But Miami's Javier Garcia-Bengochea, whose family owned the property that now makes up Cuba's Port of Santiago, said he is frustrated with failures by past administrations to effectively negotiate with Cuba.

He said he hopes Trump will come through for him, and if so, he pledges to go after every cruise line in the world profiting from his family's land.