CELAC Special Declaration: End the US blockade of Cuba 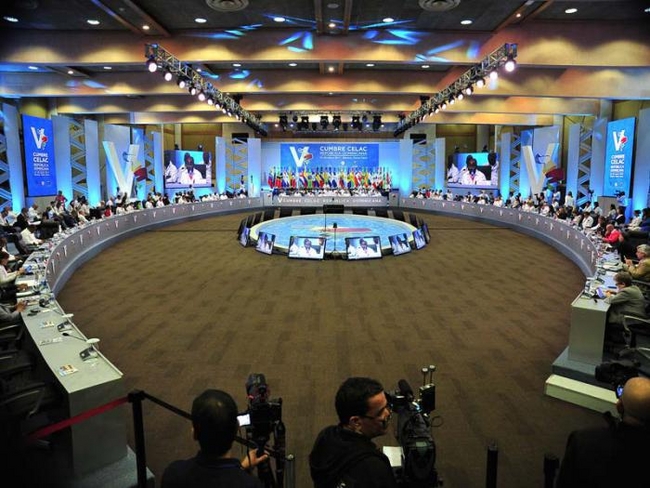 Special Declaration on the need to put an end to the Economic, Commercial and Financial Blockade imposed by the United States of America against Cuba

The Heads of State and Government of Latin America and the Caribbean, Gathered in Punta Cana, the Dominican Republic, on occasion of the 5th Summit of the Community of Latin American and Caribbean States (CELAC), on January 25th, 2017:

Reaffirming their strongest rejection of economic coercive measures not supported by the International Law, including all those unilateral actions imposed on sovereign countries for political reasons that impair the well-being of their peoples and are designed to prevent these countries from exercising their right to decide, by their own free will, their political, economic and social systems.

Reiterating their firm rejection of the application of laws and measures contrary to International Law, such as the Helms-Burton Act, including its extraterritorial effects, and urging the Government of the United States of America to put an end to its application.

Remembering that, since 1992, the United Nations General Assembly has reiterated in 25 resolutions, the need to put an end to the economic, commercial and financial blockade imposed against Cuba by the Government of the United States of America and highlighting the support given by 191 member States of the United Nations to the most recent Resolution A/RES/71/5, approved on October 26th, 2016

1. Welcome efforts undertaken to advance in bilateral relations between Cuba and the United States of America;

2. Urge the President of the United States to take all actions within his executive powers to substantially modify the application of the blockade against Cuba, and the United States Congress to proceed with its elimination;

3. Reiterate their opinion that this blockade is contrary to the principles of the United Nations Charter and International Law;

4. Also reiterate their deep concern and rejection to the strengthening of the extraterritorial dimension of the blockade, as well as on the increasing persecution of Cuba’s international financial transactions, which is contrary to the political will of the international community;

5. Request to the Government of the United States of America to fulfill the successive resolutions adopted by the United Nations General Assembly and, in response to the repeated calls from the international community, to put an end to the economic, commercial and financial blockade against Cuba, which is contrary to International Law, severely and unjustifiably damages the well-being of the Cuban people.