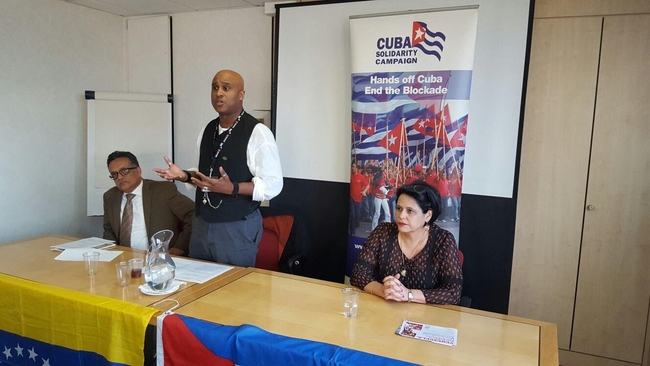 Teresita Vicente said "The most important message that I can give today is that the US blockade of Cuba remains in place – and international solidarity is crucial in our struggle to end it”.

"The US blockade is extra-territorial, so impacts on the British people too, including those who travel to Cuba via the US", the Ambassador said.

In a rallying finish to the fringe, Roger McKenzie said how “Cuba is a message of hope."

“I am an organiser, so whenever I’m at a meeting like this, I think, what can we do to help?”

“And the answer here is, go and get your branches affiliated to CSC, tell your colleagues and networks about the situation in Cuba, and let’s get organised to campaign to end the US blockade.”

“The Cuban Revolution teaches us that we're strong when part of a collective. As soon as we think we are individuals, we lose", he said.

CSC ran a successful stall at the conference, recruiting over ten new members to the campaign, and speaking to delegates about the ongoing blockade of the islands. CSC would like to thank Thomspons Solicitors for sponsoring the fringe meeting.