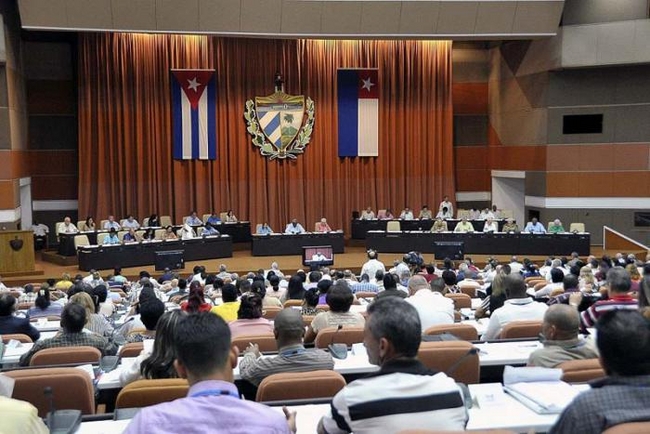 A total of 1.6 million Cubans participated in some 47,000 meetings in the furtherance of the island's social economic model.

Cuban President Raul Castro spoke at the National Assembly Extraordinary Session, expressing his support for updating the Economic and Social Policy Guidelines of the Party and the Revolution for the period 2016-2021, approved by the seventh Cuban Communist Party Congress.

The National Assembly session reviewed modifications to the Conceptualisation of the Cuban Economic and Social Model of Socialist Development, as it did in June 2016.

On Wednesday, assembly members discussed the progress made within the socialist economic system. Jennifer Bello Martinez, president of the University Student Federation and a participant in the debate, explained that "young people have also been the protagonists of this discussion and progress.” She added that the formative process of the Cuban Revolution continues to be “a permanent work of the youth.”

The head of state also recalled that these documents were the continuation of resolutions approved by the sixth Congress, the newer version of which were presented during the seventh Congress, after being reviewed by the Party Political Bureau.

Subsequently, a popular consultation process was undertaken in every province, with the participation of over 700 delegates and 3,000 guests invited to attend the Congress, during which over 1,000 proposals were made, noted the army general.

After approving the documents at that time, the seventh Congress agreed to launch a broad, democratic debate to discuss the Conceptualisation of the Cuban Economic and Social Model of Socialist Development and foundations for the National Social and Economic Development Plan through 2030, which saw the participation of all PCC members, the Young Communist League, representatives of mass organizations, and diverse sectors of society.

In this regard, he noted that a total 47,000 meetings took place as part of the process, with the participation of some 1.6 million Cubans, demonstrating a genuinely democratic and participatory exercise made possible by the Cuban Revolution.

This process contributed to perfecting the documents and represented a genuinely democratic, participatory exercise which not only served as an effective social communication tool but also demonstrated support for the PCC’s social and economic policy.

"This enables us to continue advancing on the conceptualisation of our model and to change everything that must be changed, at the speed which discussion and our ability to show that we can do things well, allow, thus stopping us from making serious mistakes which could jeopardize the success of this noble task," noted the Cuban president.

In the same session, the assembly approved a declaration in support of the government of Venezuela, "because it is vital to denounce and bring an end to the aggression being suffered by the sister nation. Imperialist interests want to prevent this country from exercising their right to self-determination; while the gross manipulation of the country’s reality by right-wing forces is aimed at overthrowing the government constitutionally elected by Venezuelans," he stressed.

The Cuban head of state also described the call for foreign intervention on the premise of helping the Venezuelan people as hypocritical. "The only way to help the people of Venezuela is to show, through action, full respect for the country’s sovereignty and support constructive and respectful dialogue as the only way to resolve differences," he stated.

"If they are really concerned about human rights, their integrity as people should compel them to condemn the coup violence which has resulted in deaths and injuries. Images of youths stabbed and burned alive are reminiscent of the worst acts of fascism. I reiterate our solidarity with the Bolivarian Chavista Revolution, with the civil-military union, and the government led by President Nicolás Maduro," the socialist leader continued.

He also expressed Cuba’s concern over events occurring in Brazil following the impeachment of President Dilma Rouseff, as well as attacks against the Workers’ Party and its historic leader Luis Ignacio Lula Da Silva.

"We are convinced that only way to restore the legitimacy of this sister nation’s political system is by respecting the sovereign will and authority of the people. The people of Brazil have, and will continue to have, Cuba’s solidarity in this struggle," he said.

He concluded by announcing to deputies and the Cuban people that the National Assembly will reconvene this July to address other important national and international matters.