Cuba denounces efforts to silence the voice of the Venezuelan people 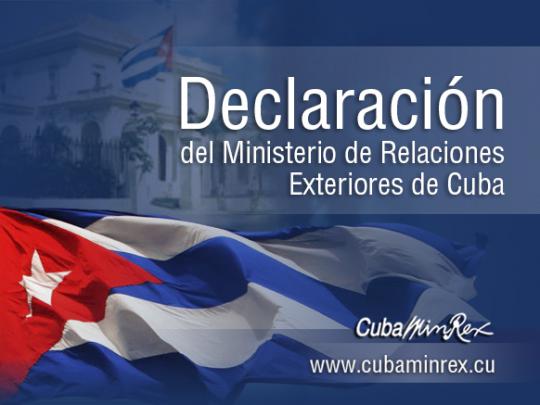 This Sunday, July 30, 2017, during elections for the National Constituent Assembly in the Bolivarian Republic of Venezuela, the Venezuelan people demonstrated to the world that they are in full possession of their sovereign rights, and are firmly on the side of peace, in defence of citizen security, of independence and self-determination in their homeland, as they have been throughout the history of Latin America and the Caribbean, since Bolívar.

Venezuela poured out to the polls as never before in a constituent process. This people, that challenged barricades, blocked streets, economic sabotage, and international threats, defeated with their votes the strategy of imperialism, the oligarchies, and an opposition which has not hesitated to unleash the most brutal expressions of cruelty. The cynicism of those who attempt to blame the government, and the defenders of the people, for crimes committed is offensive.

Cuba denounces the implementation of a well planned international operation, directed from Washington with the support of the OAS General Secretary, intended to silence the voice of the Venezuelan people, ignore their expressed will, and impose surrender with attacks and economic sanctions.

The government of the United States, for its part, has imposed sanctions directly on constitutional President Nicolás Maduro Moro, unprecedented, arbitrary sanctions that violate international law, which we condemn.

We are very familiar with these interventionist practices. They think that with this, they will achieve the submission of a people to a puppet opposition which they finance, and now promises to burn the country down.

Once again, we reiterate what Army General Raúl Castro Ruz, President of the Councils of State and Ministers, said last July 14, in the National Assembly:

"The aggression and coup violence against Venezuela harms all of Our America and only benefits the interests of those set on dividing us in order to exercise their control over our people, unconcerned about causing conflicts of incalculable consequences in the region, like those we are seeing in different parts of the world.

"Today we warn that those attempting to overthrow the Bolivarian Chavista Revolution through unconstitutional, violent coup methods, will shoulder a serious responsibility before history."

Nothing can stop a people which takes control of its destiny. Only Venezuelans can decide how to resolve their problems and chart their future. No more interventions, conspiracies, or betrayals of the Bolivarian spirit.

We reiterate our unwavering solidarity with the people and the Bolivarian Chavista government, with the civic-military union lead by constitutional President Nicolás Maduro Moros. As Fidel said at the Central University of Caracas, during his 1959 visit, "The position of the Revolutionary Government of Cuba will be a firm position, without hesitations of any kind, because the hour has arrived for peoples who know how to defend themselves and how to assert their rights."