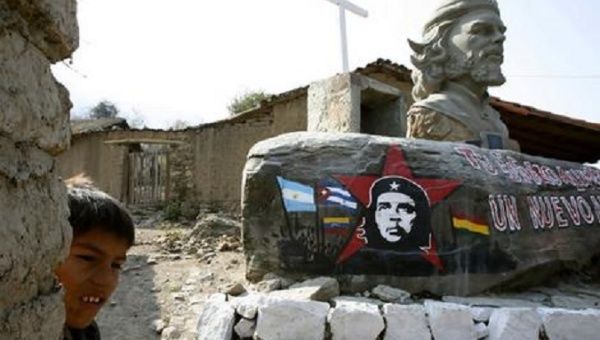 "Working as doctors today in La Higuera means keeping alive Che's legacy in the last corner of the Earth where he was alive," one doctor said.

A group of Cuban doctors who are working in La Higuera, Bolivia, where revolutionary leader Ernesto "Che" Guevara was killed, say they work to keep his spirit alive as a doctor and as a revolutionary.

"Working as doctors today in La Higuera means keeping alive Che's legacy in the last corner of the Earth where he was alive," Aniuska Pereira, one of the doctors said.

Pereira is a nurse from the Cuban Medical Brigade working in Bolivia, providing healthcare to marginalised populations high in the Andes.

She said the community doesn't have electricity and they work with a power plant to keep the medical center running, where they bring free care to about a hundred people.

La Higuera is located about 60 kilometers south of the city of Vallegrande in the department of Santa Cruz, at more than 2,000 meters above sea level. There, in a small adobe school, Che was killed on Oct. 9, 1967, by the Bolivian military

"We never thought we would be in the place where Che died," Pereira said. "It is an honour to maintain his example and the teachings of internationalism we learned from the guerrilla and Comandante Fidel Castro."

In 1966, Che launched a guerrilla movement in the South American country aimed at overthrowing the right-wing military regime of Rene Barrientos.

After months of fighting against the U.S.-trained and supported Bolivian Army, Che was captured and executed at the age of 39 after refusing to divulge information while being interrogated.

A day later, Che’s body was displayed to international media with Bolivian Army troops. It is widely believed that Barrientos' regime was instructed by the CIA to hunt down and kill the leader of the Cuban Revolution.

He was then secretly buried in the small town of Vallegrande. Several towns and cities in Bolivia’s southeast have since created memorials along the “Ruta del Che,” or Che's route.