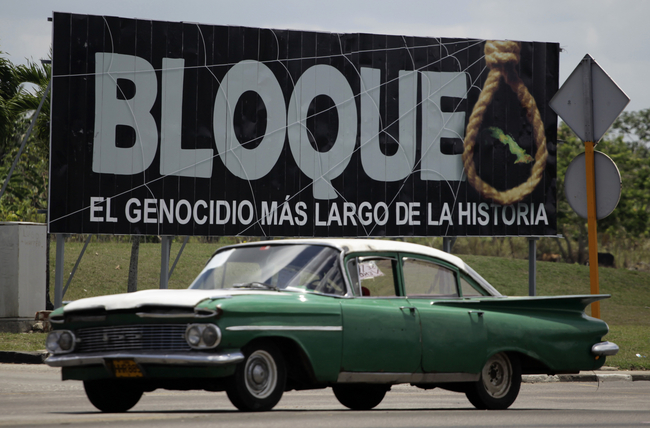 Almost 60 years after its implementation, the United States blockade policy against the Cuban people is intensifying, in a context of heightened tensions impacting on the progress achieved by the two countries in the diplomatic sphere.

This is reflected in the Report to the United Nations General Assembly on Resolution 71/5 entitled “Necessity of Ending the Economic, Commercial, and Financial Blockade Imposed by the United States of America on Cuba,” which outlines the extensive damages suffered by the island.

These figures relate to restrictions that affect the island’s economic and social development, despite the enormous efforts of the Cuban government to mitigate the obsolete and illegal policy.

Education, health, sports, culture, industrial development, tourism, food and information and communications technology continue to be some of the sectors most affected by the coercive measures of the current U.S. administration.

The report, published on the Cuban Foreign Ministry’s website, and available to download in English here outlines the extraterritorial nature of the blockade, impacting on cooperation and in open violation of international law, with the express purpose of punishing a sovereign and independent people.

President Donald Trump’s signing of the National Security Presidential Memorandum on Strengthening the Policy of the United States Toward Cuba, backed by a minority in Miami, is the latest example of the escalating aggression against the island.

This Report, presented by Cuba every year as a prelude to the UN vote on the resolution, also exposes the widespread condemnation of the blockade within U.S. society and the international community, and the Cuban people’s demand for an immediate end to the failed policy.

After 57 years of fallacious rhetoric and failed attempts to undermine our sovereignty and social project, the Report reiterates that the economic, commercial and financial blockade constitutes the biggest obstacle to the implementation of the country’s National Economic and Social Development Plan, the well-being of the Cuban people, and the normalization of relations with the United States.

More than an official report, the presentation of this document is yet another clear sign that the Cuban people will not give up their efforts to put an end to the blockade. The truth, respect and peaceful coexistence will once again be the most solid arguments in defence of our cause.

As the Report notes: “The damages caused by the implementation of the blockade throughout almost six decades have been estimated at $822,280,000,000 dollars, taking into account the devaluation of the U.S. dollar vis-à-vis the price of gold in the world market.”