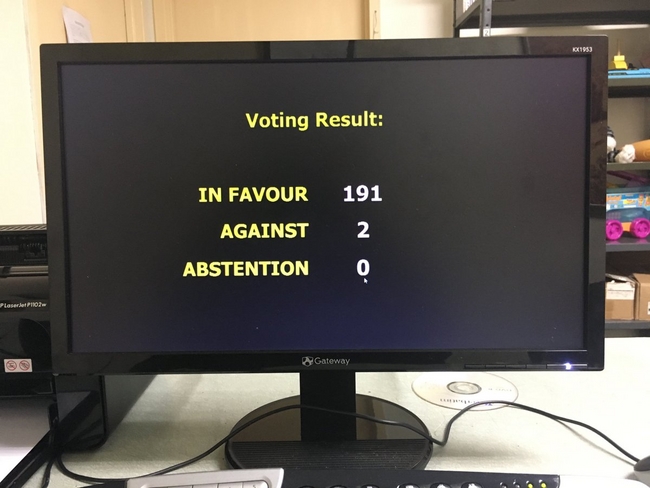 The U.N. General Assembly has voted 191 to 2 for the lifting of the U.S. blockade on Cuba as the United States and Israel were the only countries to vote against the resolution.

Delegate after delegate called for the end of the blockade, highlighting the progressive and positive role Cuba plays in the international community.

Speaking at the General Assembly, titled, "Necessity of ending the economic, commercial and financial embargo imposed by the United States of America against Cuba," the representative of African states called the hardline stance taken by the current U.S. administration against Cuba as being "a step backward" that hampers Cuba's sustainable development.

He recalled Cuba's proud history on the African continent, actively participating in liberation struggles and its ongoing contribution to improving healthcare.

“The people of Africa will continue to remember this contribution,” he said, adding that Cuba has long been a responsible member of the international community.

Cuba's Foreign Minister Bruno Rodriguez approached the podium to an abundance of applause. He responded to U.S. Ambassador Nikki Haley's comments by stating that the United States has no moral ground to stand on in its condemnation of the Caribbean island due to its “flagrant violation of human rights,” citing the arrest and deportation of minors and undocumented immigrants; the killing of African-Americans by U.S. police; the lack of guarantees for education and healthcare and restrictions on union organization; and the refusal of U.S. companies to sell life-saving medical supplies to Cuban healthcare services.

The Venezuelan representative speaking on behalf of the Non-Aligned Movement expressed full opposition to the promulgation of the economic, commercial and financial blockade against Cuba, which has lasted for over 55 years. He noted that the blockade is not only a contravention of international law, it is also a "criminal act" perpetrated by the most powerful government in the world to prevent a small Caribbean island from creating its own society.

The diplomat added that the blockade violates Cuba's right to interact with the international community, due to its extra-territorial reach in the forms of fines and restrictions on people and businesses that travel to and engage with Cuba.

After criticizing member states and their representatives for condemning the U.S. economic blockade and calling the annual vote "political theater," Haley directed her speech to the Cuban people. In doing so, she declared that her government, though standing alone in its promulgation of the 55-year-old blockade, will express solidarity with all Cubans by voting in favor of maintaining it.

The representative of the Plurinational State of Bolivia responded to Haley's speech by reminding U.N. members of Cuba's contribution to humanity. He quoted Nelson Mandela who stated that Cuba's role in the Angolan liberation struggle, which included the “decisive defeat of the aggressive apartheid forces destroyed the myth of the invincibility of the white oppressor.” Hence, Cuba has been, and continues to be, at the “service of others,” he said.

Sacha Sergio Llorenty Soliz emphasized that while the United States wants to teach everybody lessons on democracy and human rights, it turns its back on international law, believing that multilateralism is a farse and continues to promote torture and turns Guantanamo base into an illegal prison.

“They want us to believe that they are exceptional” despite harboring governments that run counter to the aspiration of all peoples who want to see an end to the 55-year-old economic blockade against Cuba.

Cuba's Rodriguez noted that every single Cuban family and social service has been adversely affected by the blockade.

"Haley speaks on behalf of an empire,” Rodriguez emphasized, one that promotes global insecurity, tramples upon international law and the U.N. Charter, “which she cynically invoked.”

He noted that Haley at least recognized “the total isolation of the United States” in its continued support of the economic blockade, disregarding the “weight of truth” expressed by the international community.

Rodriguez reminded U.N. member states and representatives that the current U.S. administration “lost the popular vote” and its attempt at undermining the Cuban Revolution “is doomed to failure.”

He quoted Cuban President Raul Castro when asserting that the U.S. and Cuba can coexist recognizing their difference, but it should not be expected that in order to do this, Cuba would yield to U.S. demands or accept any preconditions. He reiterated that the Cuban people will never “renounce its purpose” of building a socialist, sovereign, sustainable country.

In closing, Rodriguez thanked the majority of the people of the United States for supporting the lifting of the blockade.

The United States vote follows an Oct. 3 decision to expel 15 Cuban diplomats following allegations of "sonic attacks" on U.S. diplomatic staff stationed in the U.S. embassy in Havana, which the Cuban government has investigated and denied.

Since 1992, successive administrations have voted "no" on the annual resolution before the general assembly. Former U.S. President Barack Obama broke with this predictability by abstaining from the vote in 2016 as part of a new strategy of thawing relations with the socialist country.

Trump has rebuked his predecessor’s decision to open relations with Cuba. The administration has planned to re-impose strict travel restrictions for U.S. citizens to the island nation and close holes in the blockade that made it possible for investment in certain areas of the Cuban economy, including agriculture, technology, and tourism.

The annual resolution has been all but universally supported by the 193-member body of the general assembly. Only two countries have consistently voted against the resolution in recent years — the U.S. and Israel.