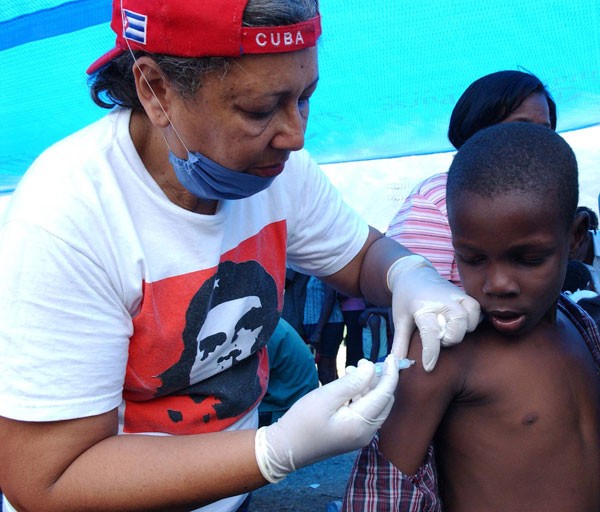 Cuba's internationalism: There are currently 65,000 Cuban doctors and teachers working in 89 countries

HAVANA, May 7 (Xinhua) -- Cuba is a model of South-South cooperation to promote equality and development, the head of the United Nations Economic Commission for Latin America and the Caribbean (ECLAC) said on Monday.

"Cuba is a relevant example of how much can be done in favour of South-South cooperation," ECLAC Executive Secretary Alicia Barcena said during a ceremony marking Cuban National Day.

Barcena, along with UN Secretary General Antonio Guterres and other agency officials were in Cuba for ECLAC's 37th session, to be held in Havana from May 8 to 11.

Cuba's government has made it a priority to collaborate with other developing countries to strengthen health and wellbeing, and to pursue policies that strengthen equality, she said, adding "it's about growing for equality, and equality for growth."

This marks the second time Cuba hosts ECLAC's annual meeting (the first time was in 1949, when it hosted the 2nd session), where Barcena will present a report on the agency's performance over the past two years, and participants will approve the work program for the next two years (2019-2020).

Guterres is set to address the opening of the session on Tuesday, and to meet with Cuban President Miguel Diaz-Canel.

The gathering will draw ministers, deputy ministers and officials from ECLAC's 46 member countries and 13 associated countries.

Cuba, a member since 1948, will take over the rotating presidency of the agency for the next two years.