CWU in solidarity with Cuba 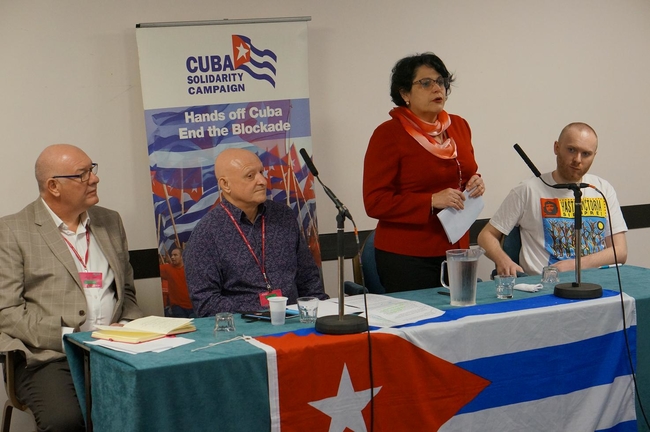 Dave Ward called for an end of the US blockade and highlighted the huge economic challenges Cuba has had to face for the last five decades due to the blockade: “We talk about Brexit and the impact it may have on our economy… imagine being Cuba, and not being able to trade with its huge neighbour, the biggest power on earth”, he said.

The CWU general secretary praised the “resilience of the Cuban people” for their social achievements that have taken place under extremely challenging circumstances. “Just think about what they could have achieved, without the blockade”, he added.

"Since the arrival of President Trump - I would argue very strongly, that it is right for our union to increase our practical solidarity with Cuba” Dave Ward pledged.

Teresita Vicente, Cuban Ambassador highlighted why Cuba is beacon across the region: "One in three people in Latin America don't have access to healthcare. In Cuba, our social gains are remarkable- healthcare and education are both free and universal"

“But Trump has further tightened the US blockade - all aimed at hurting the Cuban people and the Cuban economy", she added, and urged delegates to increase their solidarity with the island.

Jamie George, a CWU branch youth officer who attended the 2017 young trade unionists’ May Day brigade to Cuba, gave a report from his experiences on the brigade and seeing the impact of the US blockade first-hand.

Allan Eldred, CWU Assistant Secretary, chaired the fringe. “There has been a lot of coverage in the media about ‘Cuba after the Castros’ following Raul Castro's retirement from the presidency last week, but the Revolution in Cuba continues – and the US blockade continues” he said, and urged all CWU branches to affiliate to CSC.

Branches can affiliate to CSC using this form here

The Morning Star report on the fringe meeting is online here