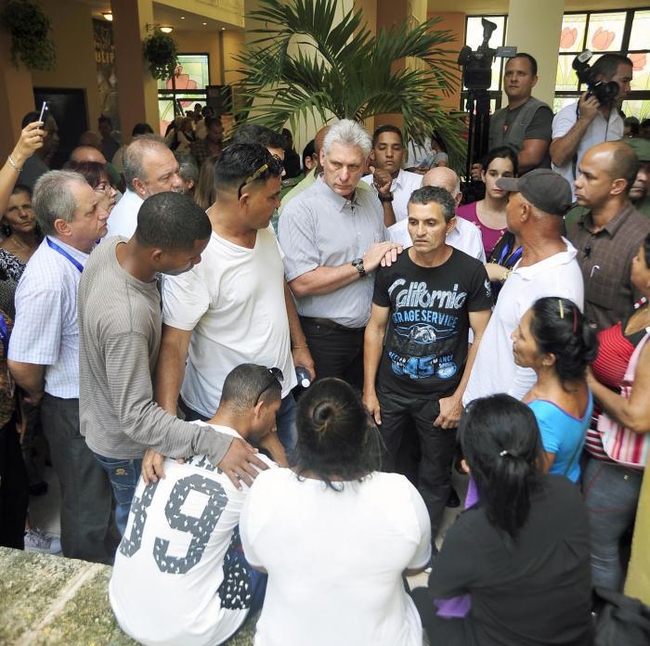 - Miguel Díaz-Canel Bermúdez, President of the Councils of State and Ministers, participated in the last day of the Response to Disasters Popular Exercise, Meteoro 2018.

- The Cuban President recognized the capacity of the Civil Defense System and the popular participation in these events, as well as the high level of preparedness shown.

- Díaz-Canel highlighted the solidarity shown by the Cuban people to the relatives of victims of the plane crash in Havana, Friday, May 18, and the will to create the conditions to attend to them.

- He noted that the Meteoro 2018 exercise allowed for the updating of plans regarding the measures to be adopted in disaster situations, based on the experiences following Hurricane Irma.

- Díaz-Canel, together with the Second Secretary of the Communist Party of Cuba, José Ramón Machado Ventura, and Party and government authorities of Havana, visited on Saturday, May 19, the relatives of the victims of the plane crash.

- It is important that they know they are not alone, the Party and the government supports them, stated Salvador Valdés Mesa, First Vice President of the Councils of State and Ministers, in a meeting with the loved ones of the victims of the air disaster.

- A total of 113 people were onboard the aircraft, 58 female and 55 male. Six were Mexican crew members and 107 passengers. Of the latter, 102 were Cuban citizens, three were foreign tourists (two Argentines and one Mexican), and two Saharans with temporary residency in Cuba. 110 people died.

- The three survivors, who have been identified, have highly complex injuries. They are in a critical condition and the prognosis is guarded, but they are being attended by a highly specialized team.

- At press time, the remains of 33 of the victims had been identified.

- The relatives of the Mexican crew have traveled to Cuba. The same procedure was followed with them as with the other relatives: biological samples were taken and interviews conducted as part of the detailed information collection process.

- The Ambassador of Mexico to Cuba, together with the victims’ relatives, traveled to the Institute of Legal Medicine, and ratified his confidence in Cuba in this type of work.

- The commission created to investigate the case is rigorously following protocol, according to the established norms.

- The aircraft’s black box was recovered and is in a good condition. Data is still being sought, explained Adel Yzquierdo Rodríguez, minister of transport.

- “We are now proceeding to collect the aggregate data that, although impaired, maintains its configuration and permits revision in secure airport institutions. From there, specialists will start work on each of the systems,” stated Armando L. Daniel López, president of Cuban Civil Aeronautics Institute and the commission created to investigate the accident.

- Two Mexican investigators are working at the site of the accident, as the plane was registered to Mexico, and European and U.S. experts are also expected to arrive, the latter representing the manufacturers of the Boeing 737-200 aircraft.

- Heads of State, personalities and citizens around the world have voiced their solidarity with the Cuban people following the tragedy.

CSC sends its condolences to the Cuban people following the disaster