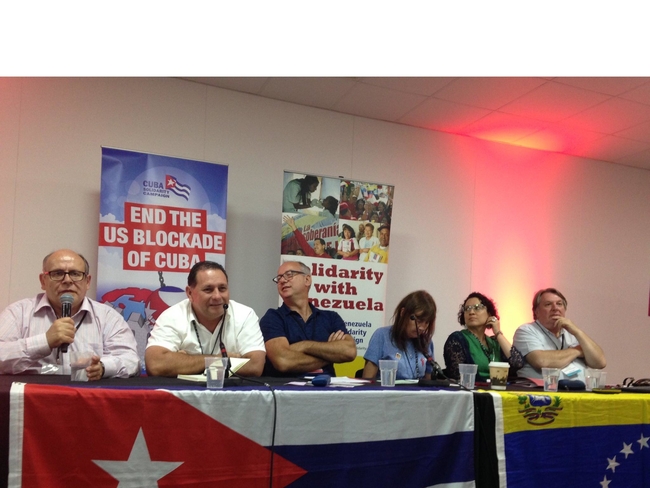 “The US blockade has a hugely detrimental impact on Cuban workers, so ending the blockade continues to be our priority” Arturo Rodriguez, Cuban Industrial Workers’ Union general secretary, told Unite Policy conference delegates at a packed Cuba Solidarity Campaign fringe meeting in Brighton.

“The majority of countries in the world are against the blockade, and due to the international solidarity that we receive, including from Unite and the trade union movement here, means that we're confident that the blockade will be lifted”.

“In addition to the US blockade, we also suffer from natural disasters including hurricanes - but we are always prepared and recover immediately”, Arturo added.

Following the recent election of Miguel Diaz-Canel, Rodriguez assured delegates that the Revolution and continues: “We are never going to give up the glory of what we've achieved over the last 60 years”, he said.

Rob Miller, CSC director, outlined the exterritorial impact of the US blockade: “During the Obama administrations, 49 fines totalling almost $15 billion dollars were implemented due to US blockade legislation”, he said.

“The US blockade impacts us here. CSC had our bank accounts closed by the Co-operative Bank due to fear of blockade fines. And last year, a Cuban student was barred from enrolling at the Open University, due to the blockade.

“But following our campaign, which had the support of thousands of our members, hundreds of MPs and many trade unions, we were victorious and the Open University overturned their discriminatory ban”, the CSC director added.

"Meeting with the Cuban workers on the Cuba Solidarity Campaign May Day brigade was the most enriching and inspiring experience of my entire life,” he said. “I would definitely recommend it to all young members.”

Jane Stewart, Unite Executive Council member, chaired the fringe and urged all Unite branches to affiliate to CSC and support the campaign to end the US blockade.