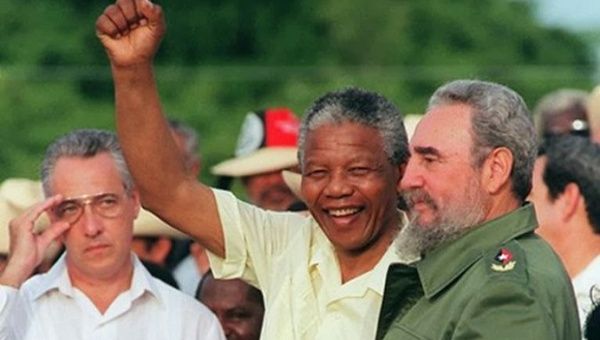 Soon after the South African freedom fighter was liberated from prison he visited his comrade Fidel Castro in Cuba.

One of the first things that the late leader and revolutionary Nelson Mandela did after being released from prison in 1991 was to visit late Cuban President Fidel Castro in Havana.

Mandela was held in Robben Island prison from 1964 to 1984 and from then until 1990 in other facilities, on charges of sabotage and planning to initiate guerrilla war against the government. Witnesses report how he was met by stampedes of hundreds of thousands of supporters, and the city of Cape Town descended into chaos.

When he was elected president in 1994, Madiba famously invited his prison guards to his inauguration ceremony.

Many look back with a selected memory of how the former prisoner's story unfolded. The man who former British Prime Minister Margaret Thatcher branded a “terrorist” was a close personal friend and political ally of Cuban revolutionary Fidel Castro.

Soon after his release from prison, Mandela traveled to Cuba in 1991 to meet his friend in person and to thank him for sending soldiers to Angola during the 1970s and 1980s to fight apartheid regimes, widely believed to be a significant catalyst to the eventual ending of apartheid.

Mandela said in his speech, “We have come here today recognising our great debt to the Cuban people. What other country has such a history of selfless behaviour as Cuba has shown for the people of Africa?”

“How many countries benefit from Cuban health care professionals and educators? How many of these volunteers are now in Africa?”

“What country has ever needed help from Cuba and has not received it? How many countries threatened by imperialism or fighting for their freedom have been able to count on the support of Cuba?”

Castro responded, "I have not visited my homeland South Africa, but I love it as if it were my homeland."

Mandela was inspired by Fidel and the Cuban Revolution in 1959 when he began a South African resistance militia to end racial oppression.

“Any and every source was of interest to me,” Mandela wrote in his autobiography “Long Walk to Freedom.” “I read the report of Blas Roca, the general secretary of the Communist Party of Cuba, about their years as an illegal organization during the Batista regime. In Commando, by Deneys Reitz, I read of the unconventional guerrilla tactics of the Boer generals during the Anglo-Boer War. I read works by and about Che Guevara, Mao Tse-tung, Fidel Castro.”

In 1994, Castro was able to return the visit to attend Mandela’s presidential inauguration after he was elected as South Africa’s first black president. Four years later, on a return visit to South Africa, Castro was given a hero’s welcome, delivering a speech to a packed African National Congress. Castro could barely get through his address for the cheers of “Cuba, Cuba,” and “Fidel, Fidel.”