EU and CELAC Urge Ending US Blockade on Cuba 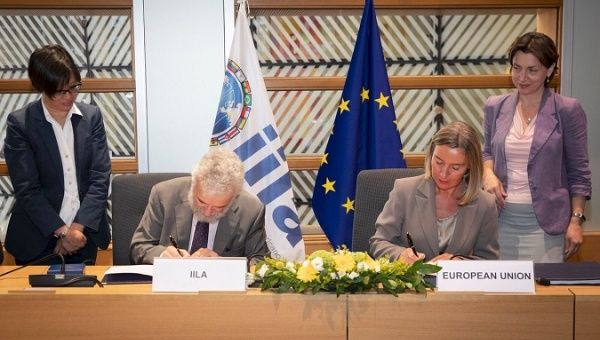 "We reiterate our rejection of the application of those coercive measures of a unilateral nature with extraterritorial effect," the delegates ministers said in the statement.

The Foreign Ministers of the European Union and the Community of Latin American and Caribbean States (Celac) called Tuesday for the end of the blockade imposed on Cuba by the United States, since "it has caused undue humanitarian consequences for the Cuban people."

"We reiterate our rejection of the application of those coercive measures of a unilateral nature with extraterritorial effect," the ministers said in the statement signed after a meeting in Brussels of the EU and Celac foreign officials.

The ministers also reaffirmed their rejection of the application of the extraterritorial provisions of the Helms-Burton Act, approved by former U.S. President Bill Clinton, which states that any non-U.S. company operating in Cuba may be subject to legal reprisals.

In this regard, representatives of the EU and Celac stressed that the United Nations General Assembly had adopted a resolution condemning this blockade, which was only opposed by the United States and Israel.

"These measures are damaging the legitimate development of commercial ties between Cuba, the European Union and other countries," concluded the EU and Celac foreign ministers.

For two days, the European and Latin American and Caribbean foreign ministers met in Brussels to give their support to multilateralism, the 2030 development agenda and fair trade.

Both the CELAC and the EU are interested in discussing investment and productivity in times when the increasingly protectionist measures promoted by Donald Trump have pushed the U.S. into relative conflict with its main trading partners.

On Tuesday, the discussions focused on trade, sustainability, investment and productivity. Representatives of Brazil, Argentina, Paraguay and Uruguay met with Cecilia Malsmtrom, the EU commissioner for trade, to discuss an agreement between the union and Mercosur.

The representatives of at least 61 countries were present during the summit, representing 15 percent of the global population.

The meeting was originally planned for last October in El Salvador but it was resceduled due to a request by the signatories of the so-called Lima Group, a set of pro-U.S. right-wing governments explicitly uniting against the Venezuelan constituent assembly and the Bolivarian revolution.