Towards the literacy of 300,000 more Haitians 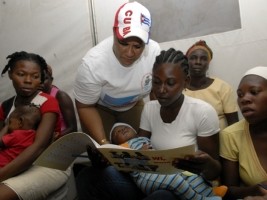 Following a working meeting of Ministers of Education Pierre Josué Agénor Cadet (Haiti) and Ms. Ena Elsa Velazquez (Cuba) at the XI Annual Congress on Higher Education held in Havana in February 2018, around monitoring among other of projects in the field of literacy, the Cuban cooperation in Haiti, is preparing the literacy of an additional 300,000 Haitians.

Let's recall that Cuba has maintained since 1999 a brigade of teachers in Haiti, which has so far contributed to the literacy of more than 400,000 Haitians with the method "Yo Sí Puedo" (Yes I can do it), a programme that that has received the UNESCO King Sejong Literacy in 2006.

"Yo Sí Puedo" was created by the eminent Cuban professor Leonela Relys for adult literacy at the request of the Cuban Revolutionary leader, Fidel Castro.

Between 2002 and 2016, the method has successfully made more than 10 million people literate in the world, including people from Venezuela, Mexico, Ecuador, Bolivia, Guatemala, Nicaragua, Colombia and Haiti.

Francisco Cirilo, Coordinator of the Cuban Literacy Brigade in Haiti confirmed that "the Cuban collaborators are already preparing for next year with the goal of literacy 300,000 Haitians in three stages of four months each."

According to official data, it is estimated that the illiteracy rate in Haiti exceeds 50% of the population or about 3 million Haitians, one of the highest rates in Latin America.