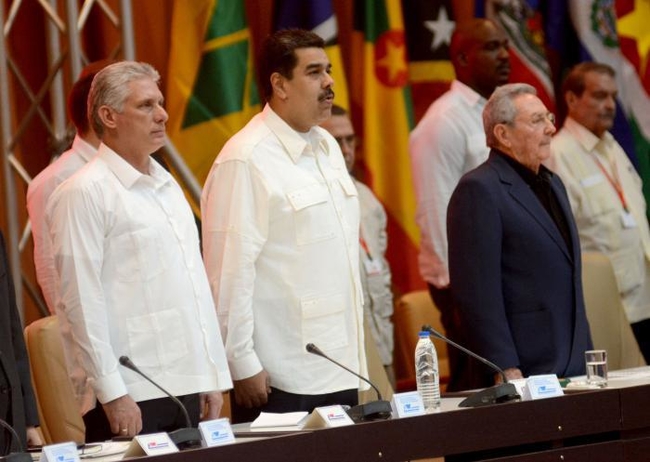 The revolutionary government of the Republic of Cuba forcefully denounces the attempted attack on the President of the Bolivarian Republic of Venezuela, Nicolás Maduro Moros, which occurred Saturday August 4, during a military parade in Caracas, on the occasion of the 81st anniversary of the founding of the Bolivarian National Guard.

This terrorist act, presuming to ignore the will of the Venezuelan people, is yet another desperate attempt to achieve via assassination what has not been possible in multiple elections, or through the 2002 coup against then-President Hugo Chávez, the 2003 oil industry lock-out, or the unconventional war conducted with media campaigns, sabotage, and violent, cruel acts.

The revolutionary government once again condemns the operation being carried out against the legitimate government of Venezuela, as part of imperialism’s policy of harassment to overthrow the Bolivarian Revolution, that includes the arbitrary, aggressive U.S. Executive Order describing Venezuela as “an unusual and extraordinary threat to the national security and foreign policy” of the United States; unilateral economic sanctions in violation of international law; the statement by the U.S. Secretary of State asserting that the Monroe Doctrine remains in full effect and calling for a military coup against the constitutional government of Venezuela; and the U.S. President’s threat of using “a possible military option” against the country.

July 14, 2017, Army General Raúl Castro Ruz warned:
“The coup plotting aggression and violence in Venezuela hurts all of Our America and only benefits the interests of those who are intent upon dividing us, to exert their domination over our peoples, regardless of the conflicts generated with incalculable consequences in the region, as we are witnessing in different places around the world.

“We forewarn today that those who attempt to overthrow the Bolivarian Chavista Revolution, via unconstitutional, violent, coup-plotting methods, will assume a serious responsibility before history.”

The revolutionary government expresses its full, unwavering solidarity with Venezuela and its unconditional support to President Nicolás Maduro Moros and the civic-military of the Bolivarian Chavista people.

As the President of the Councils of State and Ministers of the Republic of Cuba, Miguel Díaz-Canel Bermúdez, said this past July 17, within the context of the Sao Paulo Forum’s 24th meeting, we must, “Strengthen the conviction that to fight for Venezuela is to fight for the region’s integration, for respecting the sovereignty and independence of Our America.”