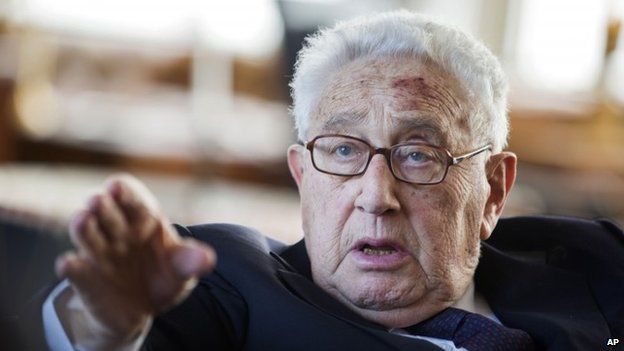 He was angered by Cuba's 1976 military intervention in Angola and was considering retaliation if Cuban forces were deployed elsewhere in Africa.

The information comes from documents declassified at the request of the National Security Archive.

They show that Mr Kissinger was eager for the US to stand up to Cuba.

The documents from the Gerald R Ford Presidential Library show that US officials devised plans to attack ports and military installations in Cuba in addition to measures ordered by Mr Kissinger to deploy Marine battalions based at the US Navy base at Guantanamo Bay to "clobber" the Cubans.
Anger

The government documents are published in Back Channel to Cuba, a new book by American University professor William M LeoGrande and the director of the National Security Archive's Cuba Documentation Project, Peter Kornbluh.

Mr Kornbluh told the New York Times that Mr Kissinger was angered by what he felt was the decision by then Cuban President Fidel Castro to pursue his own foreign policy agenda in Africa rather than normalise relations with the United States.

The newspaper reports that Mr Kissinger has refused to comment on its story.

But the newly released documents show he was infuriated by Cuban President Fidel Castro's decision in late 1975 to send troops to Angola to help the newly independent nation fend off attacks from South Africa and right-wing guerrillas.

"Kissinger, the global chessboard player, was insulted that a small country would ruin his plans for Africa and was essentially prepared to bring the imperial force of the United States on Fidel Castro's head," Mr Kornbluh was quoted in the newspaper as saying.

"You can see in the conversation with [US President] Gerald Ford that he is extremely apoplectic," Mr Kornbluh said, describing the then secretary of state's language about doing harm to Cuba as "quintessentially aggressive".

"I think we are going to have to smash Castro," Mr Kissinger told Mr Ford in a White House meeting in February 1976, adding Mr Ford should defer action until after the presidential election that November.

US contingency plans drawn up on the options warned any military aggression by the US in Cuba could lead to a direct confrontation with the USSR.

"The circumstances that could lead the United States to select a military option against Cuba should be serious enough to warrant further action in preparation for general war," one document said.

The plans were never undertaken, as Jimmy Carter was elected president that year.

Mr Kissinger's planned intervention came 15 years after a group of some 1,500 Cuban exiles trained and financed by the CIA launched an ill-fated invasion of Cuba from the sea in the Bay of Pigs.

The plan was to overthrow Fidel Castro and his revolution.

Instead, it turned into a humiliating defeat which pushed Cuba firmly into the arms of the Soviet Union and has soured US-Cuban relations to this day.

Supporters of Mr Kissinger say he played a key role in US foreign policy under presidents Nixon and Ford at the height of the Cold War, pointing out that he brokered detente with the Soviet Union, paved the way for President Nixon's landmark visit to China and who, they argue, negated the Communist threat in Latin America.

They argue that he was instrumental in securing peace deals in the Middle East and Vietnam.

But critics say he was the orchestrator of the controversial carpet bombing of neutral Cambodia during the Vietnam War and helped Pakistan, Greece, Indonesia and Chile to embark on acts of repression.