Beating the blockade of Cuba – with ballet shoes 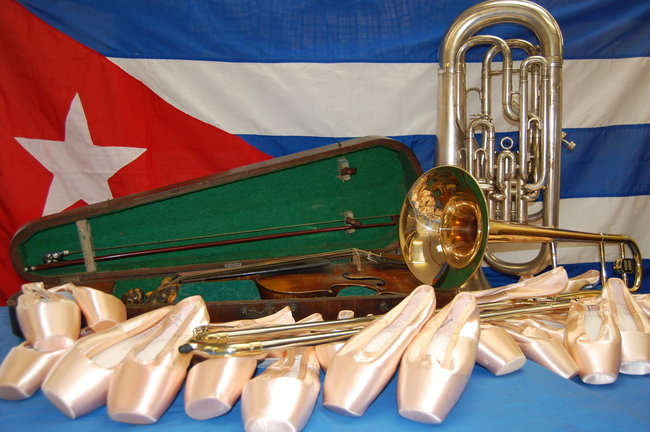 The CWU has taken its first foray into the elite world of classical dance – and is currently storing 1,200 pairs of ballet shoes that will be delivered to Cuba next year as part of a joint-union initiative to beat the vicious American blockade of the socialist Caribbean republic.

Next spring the consignment – donated by London’s Royal Ballet – will be despatched to Havana as part of a container load of musical instruments and ballet costumes that is being put together by the National Education Union and the Cuba Solidarity Campaign. In the meantime, however, the 28 boxes of ballet shoes are the somewhat unexpected responsibility of CWU assistant secretary Allan Eldred – the union’s representative on the executive of the Cuba Solidarity Campaign.

Admitting that in all of his time as a national union officer he never imagined he’d be signing for a massive delivery of ballet shoes at CWU national headquarters – especially ones from an organisation with ‘Royal’ in its title – Allan stresses he’s delighted the CWU has been asked to lend a helping hand to a special cultural link-up that is set to pirouette its way round the deeply unjust 56-year-old US blockade.

The campaign, called ‘Play for Cuba’ is collecting second hand musical instruments, dance and arts materials for schools across the island.

“Next year is the 60th anniversary of the Cuban revolution and it’s deeply appropriate that we’re helping to mark that milestone by playing a small part in an initiative to sidestep America’s illegal blockade,” Allan explains.

“That blockade means the world-renowned Ballet Nacional de Cuba can’t import ballet shoes nor the materials to make as many as they need – so consequently its students often have to perform in worn out shoes because they can only change them when they’re literally falling apart.

“By contrast, students at the Royal Ballet are given replacement shoes on a regular basis – and the organisation has been kindly collecting worn but still perfectly serviceable shoes for the benefit of fellow dancers in Cuba.”

Allan concludes “The CWU only learned about this when we hosted a visit from a Cuban trade unionist earlier in the summer – and were naturally delighted be able to offer some practical assistance in terms of providing storage before the ballet shoes can be despatched.”

If CWU members and branches want to donate second hand musical instruments or arts equipment you can find out all the details at www.playforcuba.org

Meanwhile, plans are taking shape for the CWU to play a full role next year’s 60th anniversary of the Cuban Revolution.

General secretary Dave Ward explains: “International work is a key part of what we do as a union and it’s important we show solidarity with people in Cuba and countries around the world that have put people before profit.”

“For the past 60 years, Cubans have lived under an illegal blockade from the US that has done huge economic damage. Despite this, by pursuing a different economic model, Cuba has world leading health and education systems and puts power in the hands of workers and trade unions instead of big business.”

“This campaign is one small way that we can support people in Cuba and we’ll be letting branches and members know what else they can do and about celebrations to mark the 60th anniversary of the Cuban revolution next year.”