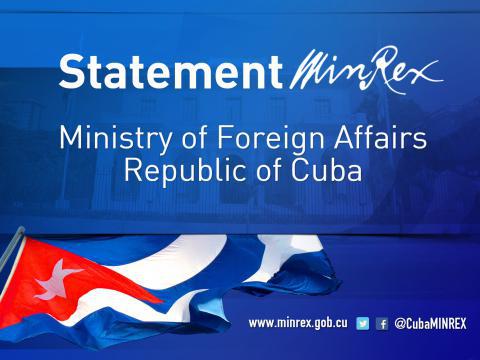 The Ministry of Foreign Affairs rejects in the strongest terms the new escalation in the US aggressive behavior against Cuba.

The US State Department announced today the decision to allow, as from March 19 this year, the filing of lawsuits before US courts under Title III of the Helms-Burton Act only against Cuban companies included in the List of Restricted Entities issued by that government on November of 2017, which was updated one year later. This arbitrary and illegitimate list, intended to tighten the blockade and expand its extraterritorial effects, forbids US citizens from engaging in direct financial transactions with the aforementioned entities.

The announcement made by the US State Department also indicated that it would suspend only for 30 days the possibility to initiate legal action with the same purposes against other Cuban entities or foreign companies which maintain commercial or economic relations with Cuba.

Since its entry into force in 1996, the Helms-Burton Act has sought to universalize the economic blockade through brutal and illegal pressures exerted by the United States against third countries, their governments and companies. It is intended to suffocate the Cuban economy and generate or increase shortages among the population with the purpose of imposing in Cuba a government that serves the interests of the US.

Given the illegitimate character of the goals they pursue, which are contrary to International Law, the Helms-Burton Act and the blockade arouse universal rejection, which has been reiterated for almost three decades at the most important regional and international fora. The most recent example of that was the United Nations General Assembly meeting held on November 1, when said policy was rejected through 10 consecutive votes, thus leaving the US in complete isolation.

Title II of the Helms-Burton Act states that the overthrowing of the revolutionary government, the subsequent tutelage by a US interventor and the ultimate establishment of a counterrevolutionary government subordinated to Washington would unequivocally pursue the return or compensation to former owners for all the properties they or their descendants might claim, regardless of whether or not they were US citizens at the moment when nationalizations took place or the fact that they abandoned them. During all that period, the economic blockade would continue to be fully implemented.

Consequently, Cubans would be forced to return, reimburse or pay to US claimants for the house where they live, the area on which their communities are built, the arable land where they farm their products, the school where their children are educated, the hospital or polyclinic where they receive medical assistance, the place where their workplace is located or where they have a private business, and also for subsidized services such as electricity, water, and communications enjoyed by the population.

This is an aspiration that can only be conceived by the minds of those who identify Cuba s a colonial possession. According to the Helms-Burton Act, the economic blockade would be lifted only when that ambition is fulfilled.

This law relies on two fundamental lies: the notion that nationalizations carried out soon after the triumph of the Revolutionary were illegitimate or inappropriate and that Cuba is a threat to the US national security.

Cuban nationalizations were carried out in accordance with the law, strictly abiding by the Constitution and in conformity with International Law. All nationalizations included processes of fair and appropriate compensation, something that the US government refused to consider. Cuba reached and honored global compensation agreements with other nations which are today investing in Cuba, such as Spain, Switzerland, Canada, United Kingdom, Germany and France.

The real threat against regional peace and security are the irresponsible declarations and actions of the US government as well as the destabilizing plans against Latin America and the Caribbean aimed at pursuing the stated purpose of imposing the Monroe Doctrine.

The Reaffirmation of Cuban Dignity and Sovereignty Act of December 24, 1996, states that the Helms-Burton Act is illegal, inapplicable and has no legal value or effect whatsoever. It considers null and void any claim under that law by any natural or juridical person.

According to that law, claims for compensation for nationalized properties could be part of a process of negotiation on the based on equality, mutual respect between the governments of Cuba and the United States, and be “reviewed together with the indemnifications the Cuban State and people are entitled to as a result of the damages caused by the blockade and aggressions of every sort, of which the US government is responsible”. It also makes it clear that those who resort to procedures or mechanisms under the Helms-Burton Act to the detriment of others shall be excluded from possible future negotiations.

The Cuban Government reiterates to all economic partners and foreign companies operating in Cuba that full guarantees will be granted to foreign investments and joint projects. Article 28 of the Cuban Constitution, which was ratified by an overwhelming majority on February 24, 2019, also recognizes those guarantees, which are also included in Law No. 118 on Foreign Investments of March 29, 2014.

Today’s decision imposes additional obstacles to our economic development and progress goals, but the United States will keep on failing to achieve its main purpose of submitting by force the sovereign will of Cubans and our determination to build socialism. The majority feelings of the peoples of Cuba and the United States in favor of improving relations and establishing a civilized and respectful coexistence shall prevail.