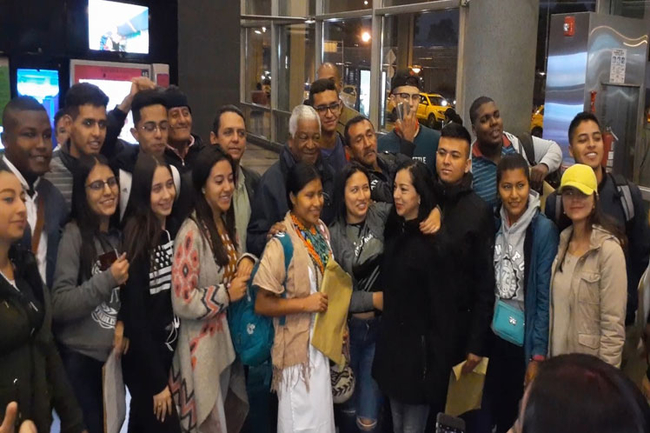 Bogota, Aug 13 (Prensa Latina) A new group of Colombian youngsters traveled to Havana today to study at the Latin American School of Medicine (ELAM), as part of a Cuban government initiative to support their rehabilitation after the signing of the Peace Agreement.

'What you are doing is the dream of Fidel Castro (historic leader of the Cuban Revolution). Without his idea, it would not have been possible to have a school that has graduated students from Third World countries, people who would not have had the opportunity to study medicine if they had not been given the opportunity in this school of a scholarship in which everything is provided for free,' expressed the Cuban Ambassador to Colombia, Jose Luis Ponce.

I am not claiming you are headed for paradise, but it is a shelter with the sufficient and necessary comforts, he noted when speaking with the young people and their families at El Dorado International Airport.

We are sure that you will appreciate the love with which we offer you this, and how we share what we have, not what we have to spare, as the basis of our solidarity, Ponce stated on a day when Cubans remember the 93rd anniversary of Fidel Castro's birth.

You have a golden opportunity to become doctors, to return to your homeland, to your communities and give back to your neighbours what you have learned in Cuba, he emphasised.

The diplomat pointed out that the awarding of the one thousand scholarships that the Cuban government promised to the Colombian people to help with the reincorporation into society of former guerillas after the signing in 2016 of the Peace Agreement between the State and the FARC-EP will be completed within two years.

Read more: 500 Ex-FARC Rebels and 500 Colombian Victims to Get Medical Scholarships to Study in Cuba (2017 article)