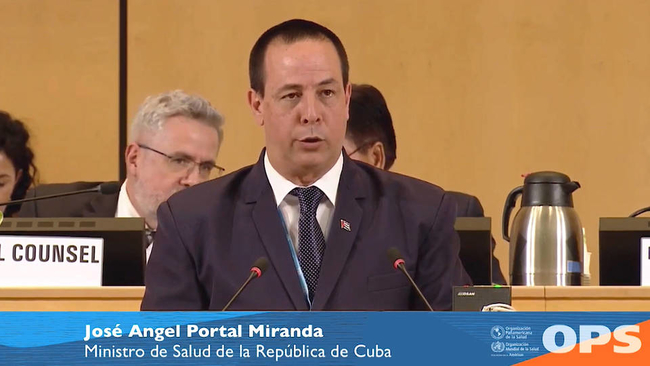 HAVANA (Reuters) - Cuba said on Monday the Trump administration denied its health minister a visa to attend a Pan-American Health Organization (PAHO) meeting in Washington and accused the United States of repeatedly violating its obligations as the host of an international organization.

The Cuban Embassy in Washington wrote an email on Monday to those who had been invited to attend an event with Health Minister Jose Angel Portal Miranda while he was in the US capital for the PAHO meeting this week, saying it was canceled because he and his delegation had not been given visas.

PAHO is the World Health Organization’s regional office for the Americas.

“The government of the United States is yet again arbitrarily and unwarrantedly in breach of its obligations as a host country of an international organization,” read the email seen by Reuters.

Earlier this month, Washington ordered the expulsion from the United States of two members of Cuba’s delegation to the United Nations for trying to “conduct influence operations” harmful to US national security.

The US State Department said it was imposing visa restrictions on Cuban officials responsible for “exploitative” labor practices in the island nation’s medical services exports program.

“Profiting from the work of the Cuban doctors has been the decades-long practice of the Castros, and it continues today,” the State Department said in a statement.

US President Donald Trump’s administration has accused Cuba of holding medical staff members on missions around the world against their will, sometimes taking away their passports and paying them meager salaries.

Cuba has rejected those allegations as lies aimed at tarnishing its health service, which generates major export earnings by sending more than 50,000 health workers to more than 60 countries.

The doctors, who often work in poor, remote regions with little other healthcare coverage, make good money by Cuban standards, even though they only get to keep 25 percent.

The Trump administration says it is pressuring Cuba’s Communist government to reform. Some analysts say it seeking to rally support from the anti-Castro exile community in the swing state of Florida ahead of next year’s presidential election.

Many Cubans complain the measures are hurting the Cuban people. The country is suffering a major fuel shortage and the private sector is reeling from a sharp decline in tourism.