Amid coronavirus pandemic, Bolsonaro’s Brazil begs for Cuban doctors – after expelling them 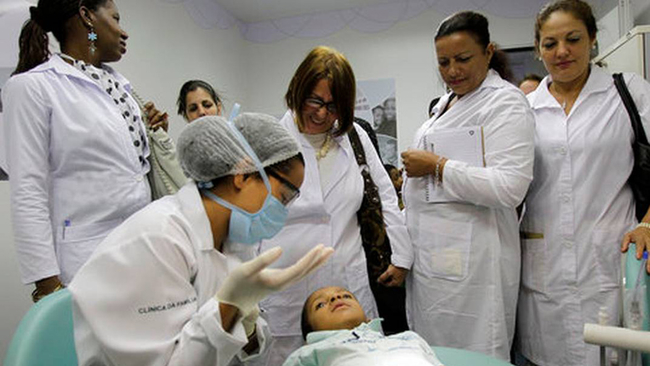 Cuban doctors observe a procedure at a health clinic in Brasilia, Brazil. Cuba was forced by the Bolsonaro regime to end a program that sent doctors to remote regions of Brazil. Now Brazil has fallen

The coronavirus pandemic has overwhelmed the health infrastructure of countries around the world. Desperate to contain the deadly virus, hard-hit countries, including even rich European nations like Italy and Britain, have reached out for expert medical help from Cuba, China, and Venezuela.

Even Brazil, currently under the control of a far-right administration that has joined the U.S. in demonizing Cuba’s socialist government, has fallen back on the small nation for much-needed medical support — requesting help from the very same Cuban doctors it expelled months ago.

Brazilian President Jair Bolsonaro has repeatedly called for the restoration of the military dictatorship, threatened his political opponents with violence, and backed terrorist attacks on Venezuela.

Bolsonaro has also taken aim at Cuba, praising the far-right military dictatorship of Augusto Pinochet for supposedly preventing Chile from becoming like Havana.

Before Bolsonaro was elected president in 2018, thousands of Cuban doctors were inside Brazil, working in some of the poorest, most remote regions of the country. Their assistance arrived thanks to an agreement between Havana and the country’s left-wing Workers’ Party government, which sought Cuban help to treat those that the Brazilian health system had long failed to reach.

Throughout his presidential campaign, Bolsonaro slammed the Cuban doctors in his country as a nefarious fifth column, denigrated them as “terrorists,” and pledged to expel them.

When he took power following a U.S.-backed soft coup against the Workers’ Party government, Bolsonaro made good on his promise. He kicked out many of the Cuban doctors, leaving impoverished rural regions without medical personnel.

By February 2020, however, the Brazilian government began to reverse course. The Bolsonaro administration had been unable to find doctors who would serve in these remote areas, so it agreed to allow the 1,800 Cuban doctors who remained in the country to return to the communities they had previously served.

And now, amid the Covid-19 pandemic, Brasilia’s right-wing occupant has done a complete about-face.

In a press conference on March 15, Brazilian Secretary of Health João Gabbardo beseeched Cuba to send back the doctors who were expelled to prevent the country’s health system from collapsing as it battled a spreading pandemic.

Gabbardo declared that 5,000 of the Cuban doctors re-deployed to Brazil will be assigned to primary care centers across the massive country.

“The PT [Workers’ Party] sent about 10,000 costumed doctors to Brazil here, in poor places, to create guerrilla cells and indoctrinate people. So much so that, when I arrived, they left, because I was going to go after them,” Bolsonaro claimed in a conspiratorial screed in 2019.

The grim reality of the coronavirus crisis has forced even Cuba’s sworn enemies to seek help from its world-renowned medical system.

Brazil has the fifth-largest economy on Earth, as well as the sixth-biggest population, with more than 210 million people. Cuba, meanwhile, is a relatively poor country with just around 11 million people and is suffering under a suffocating U.S. sanctions regime. But thanks to its socialist system, Havana has highly skilled and ethically committed doctors to spare – even to nations that have assisted the U.S. bid for regime change against it.

The Workers’ Party responded to the news in an official statement: “President Bolsonaro owes apologies to the Brazilian population and to all the Cuban doctors who were practically expelled from Brazil facing attacks, lies, and fake news.”