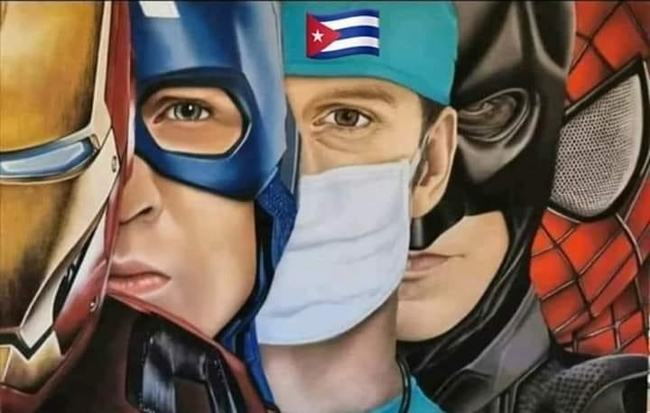 Not only is the island is combating the virus at home with 233 confirmed cases, six deaths and more than 3,000 patients under observation as of 2 April; it is also sending teams of nurses and doctors to support foreign health services overwhelmed by the scale of the crisis.

Cuban medical brigades have already arrived in 14 countries including Italy, Venezuela, Andorra, Belize, Angola and Nicaragua. The brigade of 52 doctors that travelled to Italy received a standing ovation when they walked through the arrivals lounge.

Senator Mary Isaac, the St Lucian Health Minister said that she was “excited and elated” that a brigade of 113 Cuban nurses and doctors arrived in her country on 30 March. “I’m comforted that we will have the medical assistance we need to fight this virus” she added. An additional 348 Cuban medical professionals also arrived in Haiti at the end of March to join Cuban teams already working on Cuba’s nearest Caribbean island. Cuba has also responded to requests to send medical teams to St Kitts and Nevis, Grenada and Jamaica.

This act of global solidarity was recognised in parliament by Jeremy Corbyn MP, Leader of the Labour Party, who said: “The internationalism of the doctors from Cuba who have gone to fight the virus in Italy is inspirational."

In Cuba itself, doctors and medical students throughout the country are taking part in door to door health check ups and reminding people of what symptoms to look for and the importance of staying at home. Clothing factories have been repurposed to produce face masks, public events postponed and shops have implemented social distancing regulations.

On 20 March, when the island had less than twenty cases, the government took the decision to close its borders, except for residents and foreign nationals wishing to return. Tourists in the country at the time were quarantined in hotels for fourteen days or until their flights home.
Cuban military hospitals have been designated isolation centres for sick COVID-19 patients and - hospitals in each province designated for isolation and treatment of suspected and confirmed cases.

Cuba stepped forward on 18 March when the British cruise ship MS Braemar, with more than 600 passengers, five with coronavirus, spent ten days stranded in the Caribbean trying to find a place to dock. After being turned away by several countries including the United States, Cuba organised for the passengers to disembark at the port of Mariel, west of Havana, and return to London on flights arranged by the British government.

The Cuban Ministry of Foreign Affairs said of its decision: "These are times of solidarity, of understanding health as a human right, of reinforcing international cooperation to face our common challenges, values that are inherent in the humanistic practice of the Revolution and of our people."

Cuba has also made available its anti-viral drug, Interferon Alfa-2b which is one of 30 being used in China to help with treatment of vulnerable people suffering from COVID-19
Cuba’s international humanitarian response comes despite the country facing shortages and difficulties at home as a result of the tightening of the US blockade by President Trump. Last year the cost to the Cuban health sector alone amounted to more than $104 million.

Even in the face of a global crisis, the US government still finds time to attack Cuba, issuing a series of tweets in late March warning countries against accepting support from Cuban medical brigades. The Cuban Foreign Ministry issued a strongly worded protest in response to what it described as the US’s “particularly offensive statements” and “lies.” On 1 April, a Chinese shipment of COVID-19 testing kits and ventilators destined for Cuba was aborted due to the blockade.

At this time of international crisis, the US blockade is criminal, not only for its impact on the Cuban people, but also for hindering their ability to assist in the worldwide battle against the virus. This is why the Cuba Solidarity Campaign joined the international call for the US blockade to be suspended.

We have launched an open letter to the British government calling on them to make an urgent representation to the US to end its blockade immediately, or at the very least to temporarily suspend it to allow vital supplies of food, fuel and medical equipment to the Cuban people. Cuba supported the British people on board the HMS Braemar in a time of need. This is a chance to demonstrate our appreciation.

The response to our ‘Help Cuba fight COVID-19 and the US blockade’ online action has been overwhelming. The strength of feeling and support for Cuba’s international brigades and opposition to the US blockade is clearly demonstrated. Messages have flooded in from across the globe with 97 countries represented and more than 8,000 signatures within the first few days.
The Campaign received messages from Cuba, the US, India, Brazil, New Zealand, Nepal, Ethiopia, and even passengers who were on the stricken cruise ship MS Braemer.
People who have witnessed or been treated by Cuban medical brigades or doctors firsthand, and thousands of members of the public have been inspired by Cuba’s global humanitarianism to sign the open letter.

Paula Barker MP for Wavertree said she was “humbled” by the island’s humanitarian assistance and that its “selfless acts of kindness are a beacon of hope to us all across the world, particularly when you continue to fight against the abhorrent illegal US blockade.”

Actors Maxine Peake and Guillaume Rivaud, together with trade union leaders, medical professionals and academics gave their support. Kevin Courtney, Joint General Secretary of the National Education Union wrote and tweeted, “This horrible virus does not see borders. We need to respond to it mobilising resources from every country. End the blockade on Cuba to aid the fight against the virus.”

Professor Helen Colley pointed out that while the Trump administration attempted to buy exclusive rights to any vaccine that may be discovered, “Cuba shows another world is possible, where health is more important than profit.”

We received several messages of thanks and praise from passengers who were stranded on the MS Braemar including Michael Wood who wrote: “Thanks to Cuba. I was a passenger on the Braemar recently. Several Commonwealth countries refused to help, as did the USA. Only Cuba saved us.” Christine Wickham, also a passenger, called for the blockade to be lifted: “The lifting of the US blockade is long overdue - Cuba has so much to offer the world, it's time to close the book on the past.”

The online letter was reported by the Cuban press and many Cubans also signed, including Gilberto Javier, who wrote “It was a pleasure helping the British. Be convinced that we would do it again as many times as necessary for you and anyone who needs it.”

René González, one of the Miami Five, said: “This is a time of compassion, and of understanding the common humanity which unites us all. Lifting the genocidal sanctions against the Cuban people would be the right thing to do, and would open the doors to a better world.”

Another of the Five, Fernando González, thanked CSC for carrying out the initiative: “You are the best voices of Cuba at this time.”

From Italy, Sandra Di Giantomasso gave “a special thanks to Cuba for their humanity. I was also married to a Cuban and saw first hand the devastation that these sanctions have caused to the people of Cuba.”

Nicole sent “love and solidarity from Lebanon” adding that “Cuba is in our hearts. I’ve been twice there and I saw the daily challenges they face.”

“As a Basotho I have seen how Cuba shows solidarity with other countries” wrote Mothuntsane Solomon Moramang from Lesotho.

Miguel Ángel Campillo from Mexico wrote in Spanish that Cubans don’t just help their own people, but they help all the people of the world.

The simple message from Hector Terodosoo from the Philippines summed up the sentiment of all the signers: “Thank you Cuba, your deeds will always be remembered.”