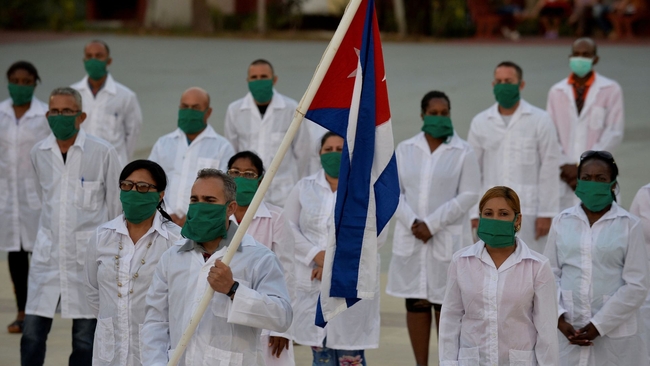 The Cuba Solidarity Campaign is adding its name to the growing worldwide call for the Nobel Peace Prize to be awarded to the Cuban international medical brigades that are fighting the coronavirus pandemic in many countries across the world.

Cuba has already sent over 2000 medics, to more than 20 countries to help in the fight against the pandemic, including Jamaica, Belize, Italy and Andorra.

The island’s altruistic response to the global emergency is part of a long history of Cuban humanitarianism. In the last 56 years 400,000 Cuban health workers have responded to natural disasters and helped build health services in 164 nations. This includes sending medical brigades to Pakistan in the aftermath of the Kashmiri earthquake (2005), to Haiti to assist with the devastating cholera outbreak following the earthquake (2010), and to West Africa in the region’s fight against Ebola (2015).

‘It has been inspiring to see Cuba’s amazing response to the pandemic at home and abroad. The Nobel Peace prize should definitely be awarded to Cuba’s international medical brigades. It would be a timely and just recognition for their brave work around the world.’

To find out more about the Nobel Peace Prize for Cuban Doctors campaign, click here: