CSC joined by Cuban Ambassador to the U.S in online meeting - 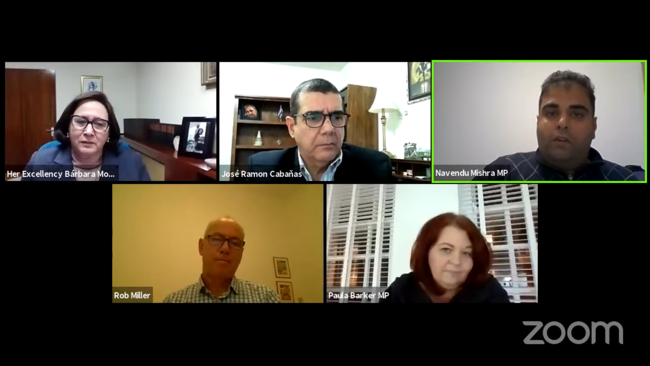 On 9 November, CSC continued its programme of online meetings by hosting the Cuban Ambassador to the United States, José Ramón Cabañas in a special discussion following the election of President-elect Joe Biden. Accompanying Ambassador Cabañas for the online meeting “Responses to the US election – what now for Cuba?” were British Labour MP’s Paula Barker and Navendu Mishra.

Over 300 people across both Zoom and YouTube joined the discussion live in what was another successful meeting in the series.

Ambassador Cabañas spoke on a number of issues including the changes in US policy from Obama to Trump, the scope for improved Cuba-US relations over the next four years, and the impact of the Cuban-American vote in Florida and elsewhere in the US.

When asked about the prospect of improved relations under President-elect Joe Biden, Cabañas said “Every Cuban is optimistic… but our foreign policy is not tailored depending on who is elected, we have one foreign policy and have told the previous 12 Presidents that we are always open to discuss differences.”

CSC’s campaign to award Cuba’s Henry Reeve International Medical Brigade the Nobel Peace Prize is well underway and is gaining a lot of traction. With over 6,000 signatures on the petition, MP’s and academics have started formally submitting nominations to the Nobel Committee.

Paula Barker MP said “I’m delighted and proud to have been able to Cuba’s Henry Reeve International Medical Brigade for the Nobel Peace Prize in 2021, for their contribution to provide medical assistance to countries that have been hit by COVID-19.

The discussion is available to watch on YouTube here