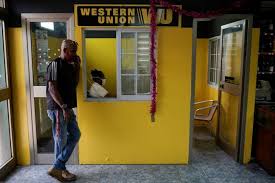 HAVANA (Reuters) - Western Union said on Friday it was suspending U.S. money transfers to Cuba in 10 days due to the Trump administration’s latest sanction on the Communist-run island, in a blow to the many Cubans who rely on remittances from family abroad.

Its customers will now have to find new ways to send transfers against the backdrop of Cuba’s deepest economic crisis since the collapse of the Soviet Union, exacerbated by the coronavirus pandemic.

One route may be in cash via flights from the United States that are resuming next week after Cuba closed its borders early in the pandemic, while other, younger digital platforms also exist.

Remittances have become one of the top sources of hard currency in an inefficient state-run economy laboring under a crippling U.S. trade embargo.


“Today we informed our customers they have limited time to send money to their loved ones from the U.S. to Cuba,” Western Union said in a statement.

That way it will wrap up its Cuba operations just before the new rules take effect on Nov. 26. These ban U.S. firms from sending remittances to the country via military-controlled companies like Fincimex, Western Union’s main Cuban partner.


Western Union said it had failed to find a solution in the one-month timeframe it was given.

“Our customers have our commitment that we will continue to explore every possible option to find a solution,” it said.

It may just be a question of time, however. as the team of U.S. President-elect Joe Biden has signaled he will reverse Trump’s moves hurting family ties including remittances and travel.