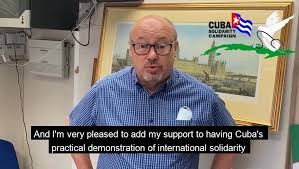 Grahame Morris MP, Chair of the All Party Parliamentary Group on Cuba

Grahame Morris MP, Chair of the All Party Parliamentary Group on Cuba, received a response from the British government on 25 January to a question he had asked about UK support for normalisation of relations between the US and Cuba following the inaugaration of new Democrat President Joe Biden.

On 20 January, Mr Morris, MP for Easington, asked the Secretary of State for Foreign, Commonwealth and Development Affairs (FCDA), "if he will make representations to his US counterpart to encourage the normalisation of diplomatic relations between the US and Cuba."

Replying to the written question on behalf of the government, Wendy Morton MP, Parliamentary Under-Secretary for the FCDA said:

"We regularly discuss a range of issues of mutual interest, including Cuba, with our US counterparts, and this will continue with the new US administration. The United Kingdom has repeatedly made clear that it opposes the US embargo against Cuba, which we see as counterproductive. The UK considers the extraterritorial effects of the embargo, in particular those stemming from the activation of Titles III and IV of the Helms Burton Act, to be illegal under international law. We look forward to discussing the situation in Cuba with the new US Administration, and sharing thoughts on the positive developments in the UK's relationship with Cuba in recent years."