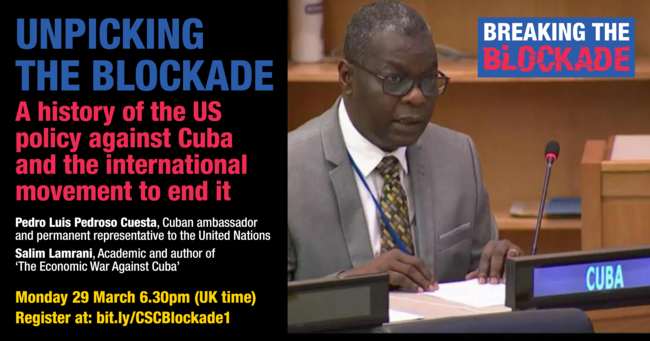 Salim Lamrani
Academic and author of ‘The Economic War Against Cuba: A Historical and Legal Perspective on the US Blockade’

In advance of this year’s United Nations blockade vote in June, we are hosting ‘Breaking the Blockade’ - a series of meetings and conversations about the history and impact of this inhumane US policy on Cuba and beyond.

This first meeting will look at more than half a century of US attempts to strangle the Cuban economy, the evolution of blockade legislation and the role and importance of the United Nations General Assembly resolutions against it over the last 28 years.

We are honoured to be joined live from the United Nations in New York by Cuba’s permanent ambassador to the UN Pedro Luis Pedroso Cuesta.

We will also have French academic, author and journalist Salim Lamrani, and a British Member of Parliament from the All Party Parliamentary Group on Cuba to speak about the impact on British companies and organisations in recent years and Early Day Motion 1550 on Cuba and the US blockade.

Please send any questions you would like included in the discussion to communications@cuba-solidarity.org.uk so that we can include them in the programme.