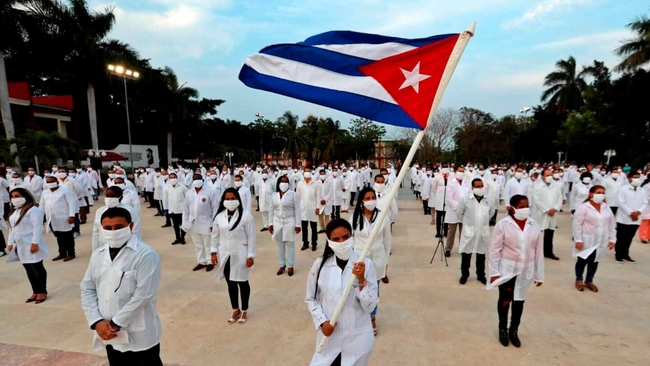 Despite an ambitious and far reaching international campaign for the Henry Reeve International Medical Brigade (HRIMB) to be awarded the 2021 Nobel Peace Prize, this year’s award went to journalists Maria Ressa (Philippines) and Dmitry Muratov (Russia) for” their efforts to safeguard freedom of expression, which is a precondition for democracy and lasting peace.”

The Oslo-based Nobel Committee said that they had the third highest number of candidates ever with more than 329 candidates, including 234 individuals and 95 organisations nominated.
In advance of the Nobel Prize Committee’s deadline on 1 February 2021, the Cuba Solidarity Campaign ran a four month campaign to collect names, messages and official nominations on behalf of the HRIMB in recognition of its humanitarian work during the COVID-19 pandemic and since its formation in 2005.

CSC worked with 28 members of the British and Scottish parliaments, and 14 academics to make official nominations to the Nobel Prize Committee. In addition to the formal nominations over 8,000 people from 120 countries signed CSC’s open letter in support of the call for the Nobel Peace Prize to be awarded to the Cuban medics. Many MPs, trade union leaders and personalities recorded video messages of support including Jeremy Corbyn MP, Len McCluskey, former general secretary of Unite the Union, and actress Maxine Peake.

The open letter recognised the more than 4,000 Cuban health workers who had supported medics in 40 countries in their fight against COVID-19, as well as the Brigade’s work since 2005 treating almost four million people in 45 countries.

“In reality it was always gong to be difficult for the doctors, nurses and technicians who make up Cuba’s HRIMB to win with so many candidates, and in the face of a high profile and cynical propaganda campaigns that the US has been running to undermine their work for the last few years. However, the international campaign achieved much in getting recognition for the inspirational solidarity and support the brigade has carried out in the sixteen years since its foundation in 2005. CSC thanks everyone who nominated and signed the open letter in support of the brigades,” said CSC director Rob Miller.