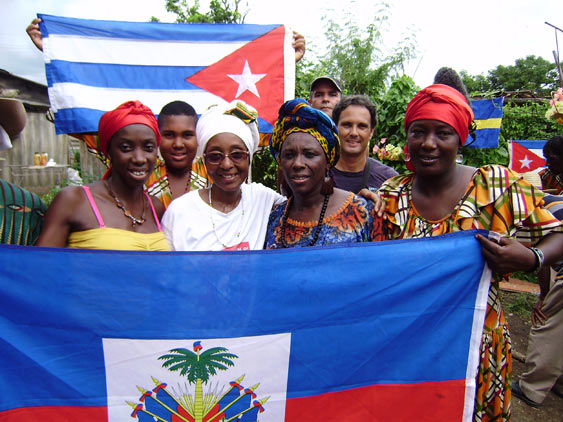 Statement by President Miguel Díaz-Canel Bermúdez at the International Conference for the Financing of the Reconstruction of the Southern Peninsula of Haiti. February 16, 2022.

His Excellency Mr. Ariel Henry, Prime Minister of the Republic of Haiti;

Once again, what brings us together here is the human drama facing Haiti, the poorest nation in our hemisphere, and also –due to its geographical position- one of the most vulnerable to the natural catastrophes that distressingly affect the Caribbean

Quite a lot is being said about the harsh blows dealt by Nature and the social violence that have punished Haiti as if it were under a curse for more than two centuries. Much less is being said though, as if there was an intention to hide other peoples’ faults, about the real causes and the dramatic consequences of the colonial and post-colonial abuses of imperial powers, which made that nation pay a high price, all through more than 200 years, for the audacity of staging the first Revolution led by black men and women who had been slaves until that moment; for being the first independent Republic of Our America and being the first nation in the entire continent to abolish slavery.

The nation that inspired in our Alejo Carpentier the idea of the ‘Marvelous Real’ as well as the original and extraordinary work “The Kingdom of this World”, has hardly survived to the harsh consequences of military tyrannies, plundering and foreign interventions, which do not come from Nature but from men and abuse of power.

That is why it is necessary to speak in stark terms about the Haitian reality and the responsibility that the entire international community has towards its definitive transformation; as well as its enormous debt with a noble and hard-working people that deserve and need our respect and support.

We all have the moral obligation to offer Haiti substantial and selfless cooperation, not only for the reconstruction of some areas but also to comprehensively promote sustainable development across the country.

Cuba speaks here with the moral authority it has earned for having shared with that sister nation -the closest to it geographically- great pains and formidable endeavors throughout centuries.

In History classes we learn about Makandal, Louverture or Dessalines as part of a single anti-racial and libertarian heritage. Cuba’s sugar and coffee are as intertwined with those products in Haiti as are the blood, tears, religious traditions, dances, songs, landscapes and culture of both peoples that embrace each other in the uniqueness of the Caribbean.

During its first decade, the Cuban Revolution recognized the right that Haitian semi-slave workers of the pre-Revolutionary period had to social security. This meant a payment of a historical debt and the defense of a principle that, from that day on, would be the unconditional solidarity with Haiti in all spheres of life.

That solidarity has reached its highest marks under specific junctures, such as the cholera outbreak and the earthquakes of 2010 and 2021, when Cuban specialists showed to the world how deep was their commitment and dedication to assist the Haitian population.

However, contrary to all other international aids, Cuban professionals did not arrive in that country after the disaster. They had been there for more than a decade, working and offering their cooperation.

The new phase of that cooperation started in 1998, when Cuba sent a medical brigade, medicines and everything necessary to assist the population affected by hurricanes George and Mitch; and hundreds of Haitian youths arrived in Cuba to attend the Caribbean School that was established in Santiago de Cuba as an affiliate of ELAM.

Since the beginning of Cuba’s medical cooperation in Haiti up until December of 2021, more than 6 000 Cuban health cooperation workers had worked in that country and had offered more than 36 million outpatient consultations, almost 9 million of them pediatric consultations; they have performed more than 721 000 surgeries and assisted more than 194 000 childbirths, thus helping to save more than 429 000 lives. More than 1 649 000 doses of different vaccines have been administered through several prevention campaigns. One thousand one hundred and twenty nine Haitian health workers have been trained in Cuba.

In August, 2021, the 253 Cuban health professionals who were already working in that sister nation were joined by a medical brigade of the International Contingent “Henry Reeve”, made up by 11 cooperation workers, to support the provision of medical assistance in the areas hardest hit by the earthquake.

Cuba has also cooperated in other projects in the areas of education, sports, agriculture, fishing, construction, water resources and environmental protection.

More than 448 000 Haitians have learned how to read and write thanks to the Cuban literacy program “Yes, I Can”; and another 1 595 Haitian students have graduated from Cuban universities.

We do not mention these data to boast about our cooperation. Nothing can be farther from the principles advocated for by Marti and the ideas of Fidel about internationalism and solidarity. We would like to place on record that we are very much aware of the serious problems affecting the sister nation of Haiti.

We have never shared what we have in abundance, but that which we have achieved and sustained with a great deal of sacrifice; because in the midst of extremely challenging times, characterized by a harsh battle against the pandemic and the tightened economic, commercial and financial blockade imposed by the government of the United States against our people, we have decided to uphold –and we have upheld- our irrevocable solidarity and humanist vocation.

And as a proof of that willingness, we reiterate here today our readiness to support the COVID-19 vaccination campaign in Haiti by offering advisory as well as our own vaccines. On January 27 last, we informed the General Secretariat of the Caribbean Community (CARICOM) of our commitment to donate 72 000 doses of the Cuban vaccines ‘Abdala’, ‘Soberana 02’ and ‘Soberana Plus’ to immunize 24 000 persons in the Caribbean. We offered to send a similar donation to all member States of the Organization of Eastern Caribbean States (OECS).

We call on all governments, international bodies and donors, with no exception, to mobilize the necessary financial resources; transfer technologies; make capacity-building mechanisms viable and meet all commitments to the Official Development Assistance for Haiti, all of which should be done with strict respect for the sovereignty, people, government and institutions of Haiti.

Cuba does not have millions of dollars, but it does have medical doctors and trains medical doctors to heal or contribute to heal the Haitian people. Cuba is aware of and calls for international awareness on Haiti’s dramatic situation. The first truly independent and free nation in Our America –for it not only expelled the conquerors but also cast off the shackles of slavery- deserves the world’s utmost attention and most urgent support. Let us make their human rights possible.

Thank you, very much.