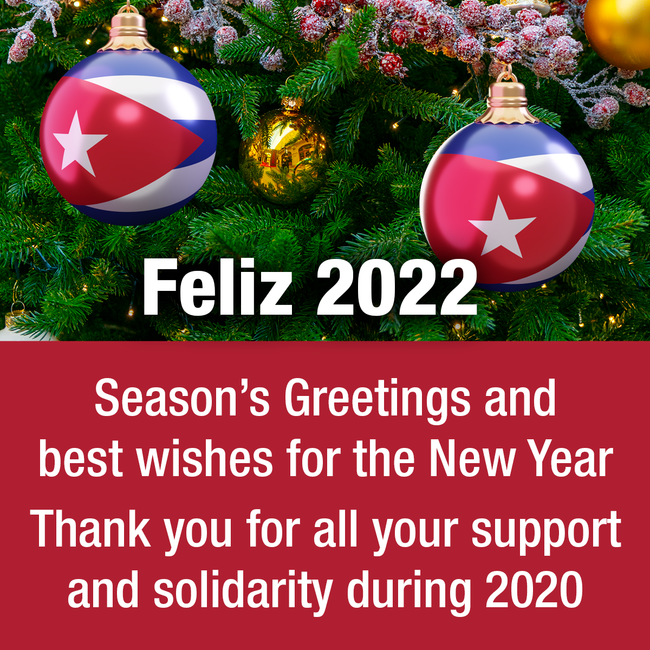 The CSC team hope you have a peaceful break and send you best wishes for 2022. We thank you for all your support throughout the last year and hope you will continue to stand in solidarity with Cuba against the US blockade in the coming months.

It has been an incredibly difficult year for Cuba. It began with the Trump administration adding the country to the US ‘state sponsors of terrorism’ list as a vindictive parting blow in January. The impact of the 243 extra measures taken against Cuba by Trump, together with the Delta variant pushing up COVID infection rates to a peak in July, created an economic and health crisis from which the island is only beginning to emerge. President Biden has dashed any hopes that he would make-good on his campaign promises to allow family remittances and ease travel and visa restrictions.

Thankfully, as 2022 draws to a close there is hope for the future as Cuba’s borders reopen and COVID-19 vaccinations have bought down infection rates.

Despite the difficulties that Cuba is facing, it has developed five vaccine candidates, three of which have been used to fully vaccinate more than 84 per cent of the population, and partially vaccinated almost 92 per cent as of 20 December.

CSC supporters helped with Cuba’s vaccination programme by contributing to the COVID-19 Medical Appeal. The appeal raised more than £120,000 and four consignments of aid have been shipped, including materials which were used in trials of the vaccines now being used for under 18s.

In addition to this major medical appeal, CSC continued to run a programme of online meetings, including an All Members Forum in which President of the Cuban Friendship Institute (ICAP) and Miami Five hero Fernando Gonzalez presented CSC with ICAP’s 60th anniversary award.

Early Day Motion 1550 was signed by 58 Members of Parliament, thanks to a CSC campaign with members. The EDM called on the British Government to promote international cooperation between the UK and Cuba and urge the Biden administration to normalise relations by removing Cuba from its ‘state sponsors of terrorism’ list and ending the US blockade.

We organised our first face to face meeting in more than 18 months at the Labour Party Conference in Brighton, and this month saw the return of the Latin America Conference which brought more than 60 speakers on Cuba and Latin America together with almost 400 delegates, for a day of discussion, learning and solidarity.

Throughout the year CSC and local groups have been participating in ‘Caravans’ against the blockade in the last weekend of the month, and we produced leaflets and posters for local groups and members to use at their events.

In November, supporters took part in an emergency protest against US intervention that CSC organised outside the Cuban embassy in London. Our Alternative Media Archive is regularly updated with links to an extensive range of resources that counter the mainstream media narrative on events in Cuba this year.

Now that borders have reopened we are looking forward to resuming our tours and brigades in 2022 and seeing friends in Cuba again as well as helping the country recover from the pandemic.

In January we also plan to launch a new appeal to send educational supplies to Cuba in association with the National Education Union, Music Fund for Cuba charity, and Cuba’s education union SNTECD. Full details will be in the next CubaSí magazine which we have continued to publish, as well as operating our online shop.

None of these actions would have been possible without the support of our members and supporters: taking actions, attending online events, donating, and sharing our activities on social media.

The US Government and right-wing exile groups have seized on the economic and health crisis caused by COVID in Cuba as a chance to achieve their dream of overturning socialism and Cuban sovereignty. As activists, we too need to increase our solidarity, and our awareness to fight these attacks and the propaganda war that is being waged.

This is why we need to be vigilant and committed in our campaigning in 2022. If you are able to support us and are not already a member of CSC, please consider joining today - you'll receive a free bag, badge and our quarterly magazine CubaSi as a thank you when you do.

And if you are already a member, and are able to, please donate to help us continue our work in 2022.

Once again, thank you for your solidarity and support for CSC during 2021. We wish you and your loved ones a safe and Happy New Year and all the best for 2022.